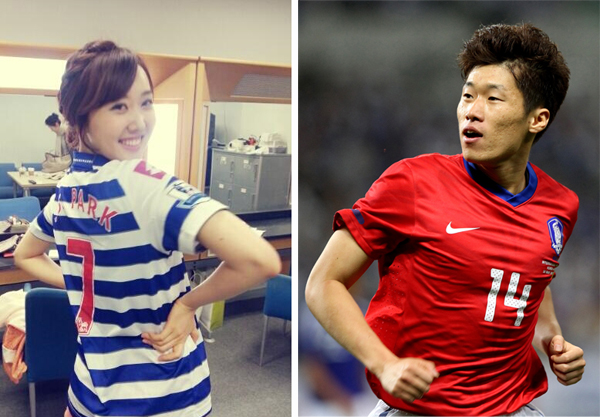 Despite rumors that he would marry actress Kim Sa-rang of MBC drama “Secret Garden,” footballer Park Ji-sung was caught on a date with SBS announcer Kim Min-ji Tuesday night.

Park was seen during his date with Kim on Tuesday night when Korea was playing Iran in the final qualifying match for the World Cup next year.

Park picked Kim up from work at SBS in Mok-dong, southwestern Seoul, and headed to Hangang Park with a bucket of take-out chicken, according to local media.

Despite the rain, the two sat on a bench and watched the football match on a smartphone. Photographs show the two holding hands.

They later moved to a cafe in Cheongdam-dong, southern Seoul, ignoring the attention from others.

Soon after reports about the date surfaced in the press, Park’s agency JS Limited announced that Park would have a press conference regarding the issue today, according to Ilgan Sports, an affiliate of the Korea JoongAng Daily.

The agency refrained from commenting further but said details will be shared later.

Park had originally planned a press conference to give local fans an update on his career plans, but recent events changed the focus and pushed the event earlier on his schedule.

Kim Min-ji specializes in presenting sports news and has shown interest in Park’s career with the Queens Park Rangers.

She tweeted a photo of herself holding a ticket to a QPR game in London in January, saying she attended alone.

There have also been rumors that Park has been involved with actresses Bae Doo-na and Kim Sa-rang.

It is widely known that Park’s father said he would not approve a marriage to a celebrity.