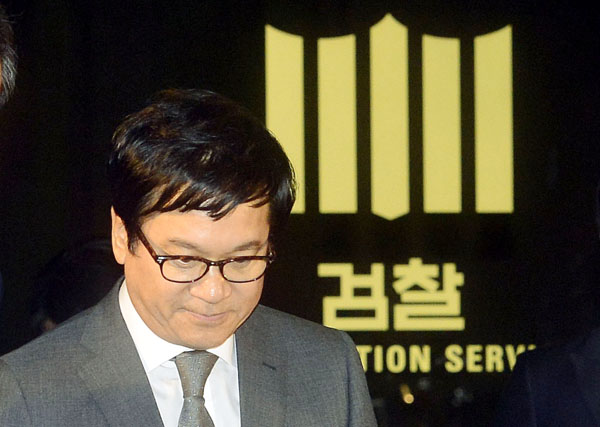 Prosecutors requested yesterday a warrant to arrest CJ Group Chairman Lee Jay-hyun a day after they summoned and questioned him in an investigation into alleged overseas slush funds and tax evasion.

The special investigation unit II of the Seoul Central District Prosecutors’ Office said they decided to seek the warrant for Lee on charges of tax evasion, embezzlement and breach of trust after Lee admitted many things during questioning Tuesday.

According to the prosecution, Lee, the head of the country’s 14th-largest conglomerate, has allegedly dodged about 60 billion won to 70 billion won ($52 million to $60.6 million) in taxes by creating slush funds through shell companies he established in the British Virgin Islands, including Chishan Development and Topridge.

It added the CJ chief has allegedly embezzled about 80 billion won of CJ CheilJedang money since 1998 by creating fake records for branch offices in Singapore and Hong Kong, detailing sales of raw materials and goods to the company in Korea with CJ, then issuing fake invoices for the transactions.

A charge of breach of trust has been added for allegedly incurring 35 billion won in losses to CJ’s corporation in Japan by putting up a building that was owned by the Japan office as collateral to borrow about 44 billion won from Shinhan Bank’s Tokyo branch to purchase two buildings in Akasaka, Tokyo.

“We found that Lee has evaded more taxes and embezzled more of the company’s funds than we thought after investigating Shin [a man known as Lee’s personal finance manager],” a spokesman for the prosecution told the JoongAng Ilbo. Shin, vice-chairman of CJ Global Holdings and a core aide of Lee, was detained by the prosecution earlier this month. The prosecution said it will indict Shin by the end of the month.

The prosecution said Lee’s under-the-counter activities were systematic and involved many of the group’s workers, which allowed prosecutors to file the warrant in such a short period of time.

The prosecution said two allegations have been dropped for the time being: that Lee tried to launder slush funds and send assets abroad by purchasing about 300 works of art under the names of dozens of CJ employees since 2005, and that Lee tried to manipulate the prices of CJ and CJ CheilJedang stock from 2008 and 2010.

Under the law, a person who sends abroad assets of more than 5 billion won is subject to life imprisonment or at least 10 years in prison.