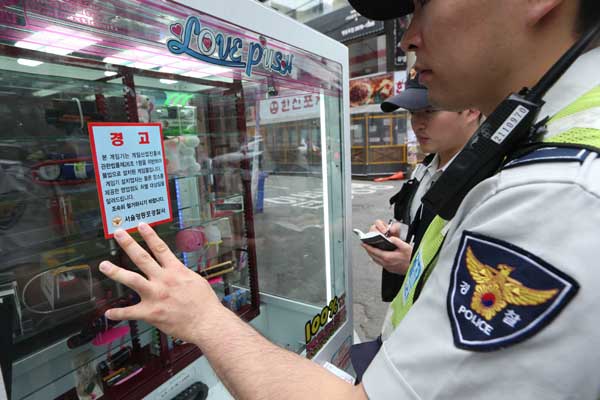 Some owners of claw crane games offer inappropriate prizes such as knives and lighters, worrying parents of susceptible children. The owners often violate the law that bans such machines from being placed outside premises. By Oh Jong-taek

The parents of students at Kwanak Elementary School recently received a notice from the school with some unexpected advice: Keep your kids away from those arcade games in which you try to win prizes by manipulating a mechanical claw.

The vice principal of the school in southern Seoul recently found some alarming prizes in the coin-operated machines: Cigarette lighters in the shape of a pistol, folded knives and handcuffs.

“The claw crane games featured snacks and plush toys as prizes in the past but now they have different dangerous stuff that can be harmful both mentally and physically,” said Yoon Mi-hee, the vice principal.

A throng of students gather in front of a claw crane game outside a barbershop near the school to win a miniature saw. As is often the case, no one succeeded in getting the prize, even after eight tries at 500 won ($0.44) each. The students moved to another machine outside a real estate agency. They cheer each other on as they try to win a toy drill.

There are 16 such machines in a 1.5 kilometer (0.932 mile) radius of the school. And while the school wants to keep its elementary school students away from potentially harmful prizes, there’s not much they can do.

“We don’t have any right to regulate the operators and machines,” the school’s vice principal said. “The only thing we can do is send a notice underlining the harmful aspect of the claw crane game machines to parents,.

Parents of the elementary school students don’t like the situation.

“Children are susceptible to dangerous things like guns and knives,” said Han Mi-young, a 33-year-old mother of a son in the elementary school. “And they can get hold of those items without any restraint.”

Most of the prizes are cheap imports from China.

“Items like turbo jet lighters are imported from China and operators know they appeal to children,” said Hwang In-kyung, president of the Korea Game Vending Machine Association. “And they’re far cheaper than items made in Korea.

She said when the machines were first introduced in 1995 most of the prizes were toys. But when they started to be placed in bar areas, where they appealed to tipsy men, the prizes started to evolve and lawmakers imposed regulations.

A law stipulates that adult-themed items, lingerie, alcohol and cigarettes cannot be used as prizes. But it doesn’t forbid prizes like lighters and knives.

The law actually prohibits shops and stores from putting the arcade games outside of their premises, although many do. The Gangbuk District has the largest number of claw crane games, 251, followed by Gwangjin with 179 and Nowon with 149. Yeongdeungpo District, has 145 claw crane boxes.

A 42-year-old restaurant owner in Yeongdeungpo Market in western Seoul was caught with three claw crane machines outside the restaurant.

“We placed the machines inside last year because of the regulation,” the owner said. “But very few people came and tried them,” he said. “I pay 150,000 won in electric bills for them every month. So, I put them outside to attract more kids.”

The owner said his claw crane games are his main income since business at his restaurant is poor. “The proceeds from the machines are used to make a living,” the owner said with a sigh.