Hotelier still the life of the party after 25 years

Hotelier still the life of the party after 25 years 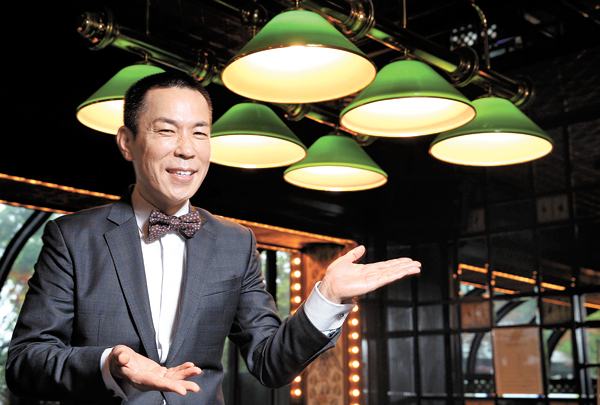 Koo Yu-hoe deserves the title “master.” He has been working in the food and beverage section of the Grand Hyatt Seoul Hotel nightclub for 27 years and now heads the division.

He began working for the hotel in 1986 and two years later became a manager for the hotel’s nightclub, J.J. Mahoney’s.

The club opened in 1988 when Korea hosted the Seoul Olympic Games, and attracted many foreign visitors for the first time.

Koo was only 27 back then but he was at the forefront of introducing the concept and culture of party in Korea.

The 52-year-old manager also tried to change the stereotype that clubs were only just for drinking and dancing.

At the Hyatt, Koo, better known by his English name, Laurent, published a book, “Hotelier Laurent’s Sight” and last month marked the 25th anniversary of the opening of J.J Mahoney’s.

“I only changed the system and a band of the facility, but the club design has stayed the same since 1988, when renowned architect John Morford designed it,” he said.

In 25 years, 15 million people have visited the club and 20 percent of them came from abroad.

The JoongAng Ilbo recently sat down with Koo to discuss his experience as a hotel manager.

Q. Where did you get party ideas from?

A. I am usually inspired by movies and traveling all around countries. I spend two or three weeks taking an overseas trip every winter and summer season. When I travel, I try to free myself from the work by just sitting in a cafe to relax and watch passengers. In 1994, while I was sitting in the airport, suddenly an idea came to me. What about making a club scene reminiscent of an airport and airplane? I try to catch one core point from various scenes. This is how I organize party ideas.

When was your hardest time?

During the IMF I went through a difficult time because many people regarded visiting clubs and parties as a lavish thing to do. But the hardest time was last month, when my older brother passed away. During this time I also had to attend an events celebration for the publication of my book. It was hard to juggle things.

What is your future plan?

I want to foster new hotel managers. It is important to have talent and a cheerful personality, but the most important thing is to have concentration to sink into one’s interest. And I will put all my passion to better serve my guests. Next year, the “Paris Grill” restaurant will have its 20th anniversary. Soon I will be super busy with this event, but I will enjoy it.