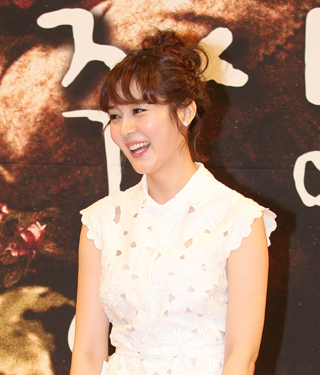 Actress Sung Yu-ri of MBC’s “Feat of the Gods” and former member of 90s girl group Fin.K.L will join SBS talk show “Healing Camp” as actress Han Hye-jin of the film “26 Years” steps down from the show after getting married.
Sung will participate in her first filming today of the show, which has invited renowned dermatologist Ham Ik-byeog.
One of the officials at SBS was quoted as saying that they will be talking about Ham’s close relationship with his mother-in-law, according to local media reports.
It is not the first time Sung has been a host. A decade ago, she hosted a weekly entertainment show titled “Section TV Entertainment News” on MBC.
“Although she has some experience in being an MC on a show, she is actively reviewing the previous ‘Healing Camp’ shows as it has been too long,” said the official, adding that the production team has high hopes for her.
“I feel delightful and honored to join the show that I had often enjoyed watching,” said Sung, according to reports.
“Although I feel burdened, I think I can have a great time during the filming.”