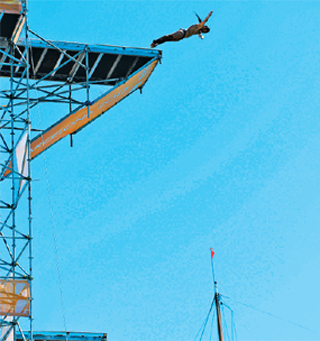 Orlando Duque of Columbia competes during the men’s high dive at the 15th FINA World Championships in Barcelona, Spain. [XINHUA/NEWSIS]

BARCELONA, Spain - Orlando Duque just had to be the first man to be crowned high diving world champion.

But even the 38-year-old Colombian cliff diving legend needed a wobble by main rival Gary Hunt on the last dive of Wednesday’s final to snatch the inaugural gold medal by just 0.9 points.

Duque, Hunt and the other fearless competitors plummeted three times from the equivalent of a nine-story building into the Barcelona harbor, adding the scores to their first two rounds from Monday.

And when the murky green water had calmed, Duque’s 590.20 points were worth the first gold medal in a sport he has nurtured into the mainstream with 15 years of tempting fate and wowing awe-struck crowds.

“To know that when they look at the records, my name will be there first is important,” said Duque. “Besides, I am the old guy of this group. I’m 38 years old and I’m jumping with guys who are 23. It was looking a little difficult after that second dive because Gary, Gary is Gary and he always nails them, but he committed a little mistake at the end. But that is the nature of the competition, someone wins, someone goes home crying.”

Hunt, the reigning three-time champion of the Red Bull Cliff Diving World Series, finished with 589.30 points to take silver. Hunt’s medal was the first for Britain at these world championships. Mexico’s Jonathan Paredes claimed bronze with 578.35.

American pool diving great Greg Louganis was one of the event’s judges. He said that Orlando’s years of diving made the difference.

“I know [Hunt’s] better than what he showed today,” said Louganis. “But Orlando, you can’t take anything away from Orlando. He’s got so much experience. It was great to see them right at the end duking it out.”

Duque won the Red Bull series in its first edition in 2009. But he has watched Hunt dominate it for the past three years, including seeing the series title escape in similar fashion to his victory on Wednesday on the last dive of the 2012 season.

On Wednesday, Hunt appeared set to celebrate the world title after opening up a commanding 38-point lead with a very difficult and risky backward pike with three somersaults and four twists for a massive haul of 170.10 points. But his angled entry on the final effort let Duque grab the gold.

“As soon as I did my last dive, I was disappointed, but it’s kind of slipped away now. I was so happy to be on that podium,” said Hunt. “I never thought I’d see a world championship medal live, and now I’ve got one hanging around my neck. I’m very happy and just proud to be part of this world championship.”

Thousands turned up to line the city shoreline for the “extreme” aquatic sport, enjoying its atmosphere and the divers’ surfer-esque swagger as they soared downward from the temporary 27-meter platform.

No diver was injured in the falls that take three seconds to complete despite speeds reaching 100 mph. After breaking past the surface feet-first like a projectile, the participants bobbed up and gave the scuba divers there to ensure their safety the “OK” signal that their bodies were in one piece.

The world swimming federation approved high diving five months ago as a world championship event, hoping to tap into the popularity of the Red Bull series.