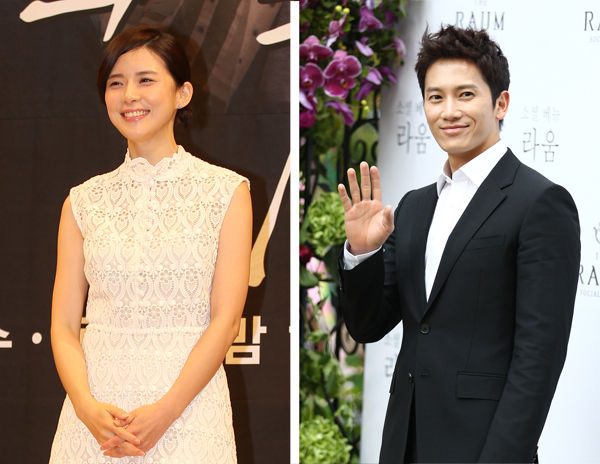 Actor Ji Sung of the MBC drama “Royal Family” and actress Lee Bo-young of the SBS drama “I Hear Your Voice” announced their plan to get married yesterday - but more than just a simple announcement, they told their news via hand-written letters posted on two of their related Web sites.

“I think you may have expected this, but I’m ready to start a family,” wrote Ji in his letter. “I’m very nervous and excited and I hope our fans congratulate us.”

The announcement came a day after the last episode of Lee’s drama aired on Thursday.

“I’m sorry to break the news to those fans who are still living with the characters from my drama, but I had to tell you now as I have limited time,” said Lee.

“The characters in the drama will live happily ever after in your mind, and I’m very thankful for the character I got to play before I get married.”

She then asked for fans to stay with her and cheer her even after she’s married.

“If you try to leave me because I’m getting married, there is nothing I can do, but I believe that you won’t do that to me,” she said.

“I still lack in many things, but I’ll become an actress that continuously grows. I love you.”

The two met through the SBS drama “Save the Last Dance for Me” in 2004 and then admitted to dating in 2007. They will get married at the Walkerhill Hotel in eastern Seoul.

Other details regarding the wedding ceremony have not been set yet. But as Ji is currently considering starting the KBS drama “Secret” in September, people are speculating the couple will not have time for a honeymoon.

The bride-to-be has also been talking about doing some volunteer work in Africa in October as a honorary ambassador for Unicef, although the trip has not been confirmed yet, according to local media reports.