Despite fame B1A4 are all on the same page

Despite fame B1A4 are all on the same page 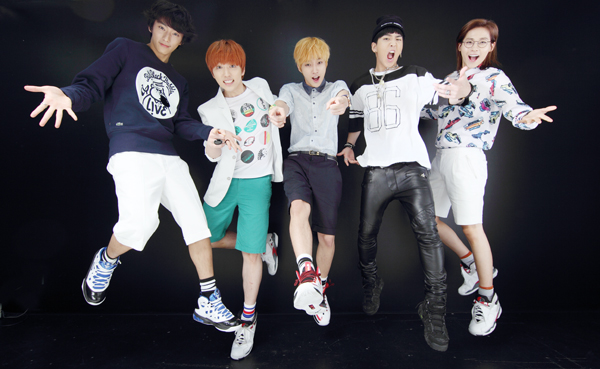 The K-pop group B1A4 didn’t exactly explode onto the scene when they made their debut two years ago. The five-man group’s first single, “O.K.,” only made it to 90th on the Gaon charts, and the EP, “Let’s Fly,” quickly disappeared.

How completely things have changed since then. B1A4’s releases all hit the top of the charts now, and the group has gained quite a following in Japan and around Asia.

Last weekend, the group performed for 10,000 fans, in a concert that sold out almost immediately after tickets went on sale.

As B1A4’s fan base has grown, the group decided that it needs to have closer contact with its fans, so it also added several smaller shows to its schedule, showing their gratitude to their dedicated fans.

The guys of B1A4 recently met with Ilgan Sports, an affiliate of the Korea JoongAng Daily, to talk about one of K-pop’s most popular groups.

Q. It is rare for an idol group to have a five-day-long series of concerts. Why did you decide to do that?

Jinyoung: Because we have been preparing for a long time, we wanted to show fans how much effort we have put in. So we’ve decided to have more concerts, but in a smaller venue, so we could have closer contact with the fans. We didn’t think preparing was hard because we were excited to provide an unforgettable memory to fans.

Did you really prepare for the concert for six months?

Baro: Ever since we did out first solo concert in December, we were planning these shows in our heads. We thought about the music, the things we are going to say, and the videos. It was almost like producing a movie. Because we all love to talk, we talked a lot about how best to present ourselves to the fans and time just flew.

Why did you perform with a live band instead of pre-recorded music, like most K-pop acts?

CNU: We were trying to make the music quality as good as possible. In fact, we had never performed together with a band before, so getting everything right was really hard. This made us practice longer and required in-depth music study sessions.

Why did fans give you stationery items instead of flowers at the concerts?

Gongchan: It was part of a campaign to encourage donations to good causes. We have been promoting charities that fight hard-to-cure diseases and that help children from low income families.

What’s your plan for the rest of the year?

Jinyoung: We will have a tour concert in Japan and then will release a new song in Korea. Each member will also focus on developing his individual projects.