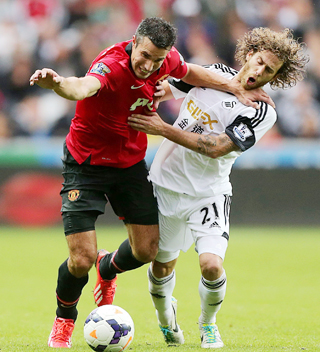 Wayne Rooney, who has reportedly told the club he wants to leave Old Trafford, came off the bench for the last 30 minutes of the match as United’s Premier League title defense got off to an impressive start.

“Our job is to win the game and the players did it well,” Moyes said. “We could have played better at times but I am more than happy with the result.”

Swansea began the game as the brighter side, with Michu forcing a good reaction save from United goalkeeper David de Gea midway through the first half, before heading the resulting corner wide.

But van Persie opened the scoring with an acrobatic strike in the 34th minute. He controlled a deflected, looping pass from Ryan Giggs before volleying past Michel Vorm in the Swansea goal. Welbeck scored his first of the game two minutes later, tapping in Antonio Valencia’s drilled cross from close range.

Swansea manager Michael Laudrup made two changes at halftime as he looked for a response from his team, bringing on striker Wilfried Bony for his Premier League debut and Pablo Hernandez for Leon Brittain and Wayne Routledge.

But it was the first substitution that Moyes made, after 61 minutes, which grabbed more attention as Rooney replaced Ryan Giggs in the midst of English media reports that he wants to leave United for rival Chelsea.

Van Persie eventually got the third, his second of the game on 74 minutes, cutting inside on his favored left foot and curling a powerful shot beyond Vorm and into the top corner from outside the penalty box.

Bony managed to get a goal 10 minutes from the end with a neat first-time strike on the edge of the area before Welbeck completed the scoring, receiving a through ball from Rooney and lifting the ball over Vorm and into the far corner of the net with a sublime chip.

Aston Villa compounded the simmering frustration at Arsenal by winning 3-1 at Emirates Stadium while Liverpool defeated Stoke 1-0 thanks to Daniel Sturridge’s 37th-minute goal.

In Bundesliga, Mario Mandzukic’s first-half strike was enough for Bayern Munich to grind out a 1-0 win at Eintracht Frankfurt in the Bundesliga on Saturday. Mandzukic scored in the 13th minute with a fine volley from Thomas Mueller’s cross.