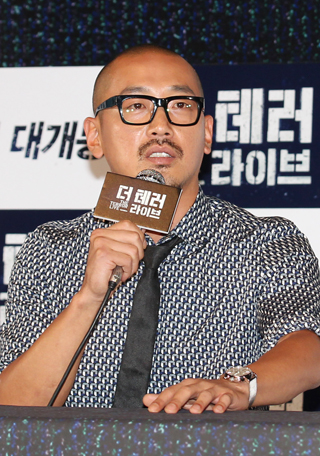 Does actor Ha Jung-woo, the star of the recently released movie “The Terror Live,” also have what it takes to become a successful filmmaker?

We will find out soon enough. “Roller Coaster,” a movie Ha wrote and directed, is coming to local theaters on Oct. 17.

As Ha has had such a string of hits over the last few years, including “The Berlin File,” “Nameless Gangster” and “Take Off,” many industry experts say they expect his new film could do well.

Many of Ha’s films are more serious, but “Roller Coaster” is more comical, depicting a plane full of absurd characters who go haywire when their flight encounters unexpected turbulence and threatens to crash.

The movie stars Jung Kyung-ho, most recently of the JTBC drama “Heartless City.” He plays a big Korean pop star named Ma Jun-gyu, who happens to be on the troubled airplane.

Early word from people who have seen the film is quite positive, with many saying that it is reportedly quite funny.