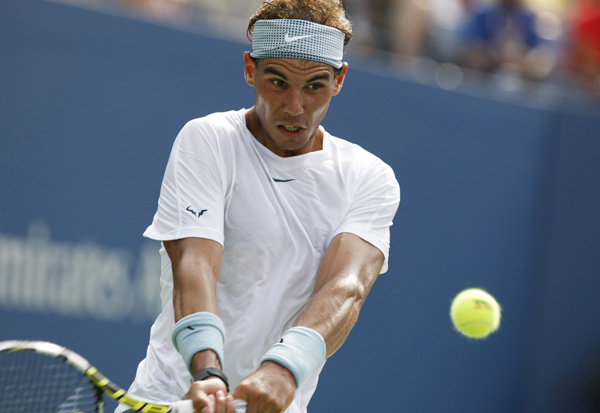 NEW YORK - Rafael Nadal crushed another opponent at the U.S. Open on Saturday, only to see his title rival and likely quarterfinal opponent Roger Federer later record an even more convincing victory.

Nadal beat Ivan Dodig, 6-4, 6-3, 6-3, affirming his position as the favorite to win this tournament. The second-seeded Spaniard has lost just 21 games across three matches and has faced only five break points, saving each one of them.

Federer then emerged at Arthur Ashe Stadium and notched an even more imperious victory, dominating Frenchman Adrian Mannarino in a 6-3, 6-0, 6-2 victory that came in just 81 minutes. The five games conceded brought Federer’s tournament tally to 21 - the same as Nadal - and the Swiss has spent only four and one-half hours on court, making a mockery of fears that his career was on the wane after an early exit at Wimbledon and patchy form since.

“There’s always a lot of pressure coming out here on this court to perform, because you never know if you’re going to play well,” said Federer, who compiled a 34-8 edge in winners, “but tonight was one of those nights.”

The 38th-ranked Dodig beat Nadal at the hard-court tournament in Montreal two years ago. But Nadal is looking like the king of hard courts these days, with an 18-match winning streak on the surface.

“I am winning because I am playing well from the baseline and I am making the right decisions in the right moments,” Nadal said.

Before they can play each other in the quarterfinals - in what would be their first ever match at a U.S. Open - Nadal and Federer must negotiate tricky fourth-round matches.

“I don’t look ahead,” Federer said when asked about the looming Nadal clash, “even though I understand the urge of the press to try to go there already. I have gone through that my entire career, people talking about our matches even before the tournament started.

“We’re used to it. We know how to handle it. Clearly, I think we both hope it’s going to happen this time, for the first time in New York.”

The losses by Isner and Sock meant wild card Tim Smyczek was the only American man left in the singles draw.

Unless Smyczek manages to beat Marcel Granollers on Sunday, there will be no Americans in the men’s singles round-of-16; the first time that has ever happened in the U.S. Open, dating back to 1881.

Serving on game point at 5-3 in the second, Azarenka pumped her fist and started walking off the court after the 26th-seeded Cornet hit a backhand into the net. The chair umpire had to get her attention to inform her that the line judge had called Azarenka’s previous shot out - replays showed it landed inside the baseline. The umpire overruled the call, but they still had to replay the point.

“Are you freaking kidding me?” Azarenka howled to the chair umpire. “What the hell are you doing?”

After the match, she put it this way: “That was the most ridiculous thing there is.”