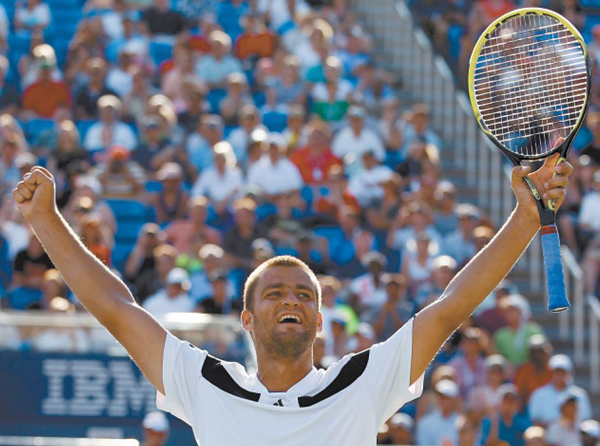 Mikhail Youzhny of Russia celebrates his win over Lleyton Hewitt of Australia at the U.S. Open tennis championships in New York, Tuesday. [REUTERS/NEWS1]

NEW YORK - Rejuvenated at age 32, Lleyton Hewitt was two points away from reaching the U.S. Open quarterfinals for the first time since 2006.

A champion at Flushing Meadows a dozen years ago, Hewitt could not close out Tuesday’s five-setter against 21st-seeded Mikhail Youzhny in the fourth round.

“It’s one of the hardest games to win - the last one,” Hewitt said.

How close was it? Hewitt won more total points, 146-145. Wearing his trademark backward-turned white baseball hat, he got within two points of winning at 5-2, then served for the match at 5-3.

“I left it all out there,” he said. “There’s not a whole heap more I could have done.”

At 2-2 in the fifth set, Hewitt tore some skin off his left elbow while diving for a shot. After Youzhny won the point to get to 15-30 on Hewitt’s serve, play was halted for a medical timeout while a trainer treated the bloody scrape on the Australian’s arm.

Two-time major champion Hewitt had been 7-0 in fourth-round matches in New York, but he hadn’t even been that far in seven years. A former No. 1-ranked player who is currently 66th after a series of foot and hip injuries, Hewitt last got to the quarterfinals of any Grand Slam tournament at Wimbledon in 2009.

Asked whether he could see himself still competing at the U.S. Open in three or four years’ time, Hewitt shook his head and replied: “I don’t know, mate. No idea.”

Youzhny’s best Grand Slam showings have come at Flushing Meadows, where he made the semifinals in 2006 and 2010 - and also lost in the first round each of the past two years.

The 31-year-old Russian will face No. 1 Novak Djokovic in the quarterfinals. Djokovic won 45 of 53 service points while eliminating 43rd-ranked Marcel Granollers, 6-3, 6-0, 6-0 in only 79 minutes Tuesday.

“First of all, I need to recover after this,” Youzhny said, adding that it will be “really tough to beat” Djokovic.

“But you never know,” Youzhny continued. “We will see.”

He praised Hewitt as a “great, fighting player .?.?. who is fighting every point, every match.”

Every time it appeared one man or the other was pulling away, the other got right back into it.

Hewitt trailed by a set and a break before going ahead 2-1 in sets. Then he grabbed 11 of the first 12 points to start the fourth, going up 3-0 and 4-1. But Youzhny responded with a six-game run. In the fifth set, Youzhny broke in the first game by making a long sprint, then sliding wide of the doubles alley, for a backhand winner. Sticking to the match’s pattern, Hewitt broke right back.

In 80-degree Fahrenheit (27-degree Celsius) heat, two of 12 active men who have made it at least as far as the quarterfinals at all four major tennis tournaments appeared content to hang out at the baseline for lengthy exchanges, often slicing backhands or simply placing forehands in the middle of the court. Points would last 10, 20, 30 strokes.

“Obviously,” Hewitt said, “it could have gone either way.” AP