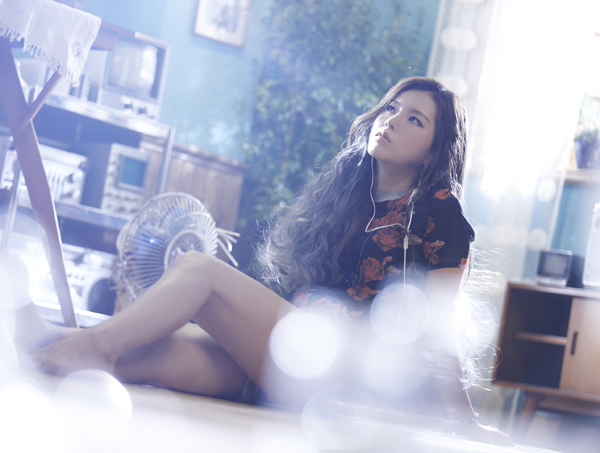 Since competing on “Superstar K3” in 2011 as the duo Togeworl, singer Kim Ye-rim has gone toe-to-toe with such big-name stars as G-Dragon, Park Jin-young and Kara on the local music charts.

Also known as Lim Kim, her first EP, “A Voice,” topped music charts in June thanks to her unique, husky vocals and the catchy song “All Right.”

Behind her successful run has been Yoon Jong-shin, a veteran singer and one of the “Superstar K” judges, who has written many of Kim’s songs.

Kim is just 20 years old but is presenting a rather different image than most young K-pop stars, looking more mature than her real age instead of trying for younger and cute.

“Maybe [people see me as older] because of the character I have,”

Kim told Ilgan Sports, an affiliate of the Korea JoongAng Daily. “But all my friends are like this. Twenty-year-olds are not so young these days.”

Q. Do you think that the new song “Rain” feels a lot like the ballads Yoon Jong-shin released in the 1990s?

A. I have heard that the song feels much like Yoon and that makes sense as he made them. I think my voice made a good combination with his song.

It is about missing the voice of an old lover. And Yoon wanted to talk about the nervous emotions you get when thinking about a lover’s voice, more than meeting him or her in person. It seemed fresh to me, and I realized that people have had that experience, of thinking they heard an ex-boyfriend’s voice while walking down the street.

What music did you want to do on this album of seven songs?

I have put jazz-style songs, acoustic songs and some quiet ones. I don’t want to do just one kind of music. I have a lot I want to try.

How was working with Yoon?

We fit very well. I feel like he knows a lot about me. He quickly catches voices and emotions that I don’t know. He likes talking and he likes listening. He has never scolded me.

Didn’t you try to add some choreography to the first EP?

I have not taken a lot of dance lessons. I think I danced a couple times when I was competing on “Superstar K,” and frankly that was the first time I tried dancing. I think I’ll do it more. If it is necessary to look at something to present a song well, I should try to do it as much as possible.

Are there any audition show singers you’ve noticed?

I think they are all very good. In my case, I focus more on the facial expressions of Yoon. Then I can sense who has a better chance.

Why do you think that your song is selling so well?

We were satisfied after the recording but didn’t know how the public was going to take it. People have felt the emotions in my voice, and I’m thankful for that.

How has life changed since your debut?

Before my debut, it was my goal to become a singer. Now I am thinking about the next step. After focusing on the album I’m working on, naturally I pay attention to the next album I’m going to be doing. I think I have promoted my voice well, although I’m the newcomer.