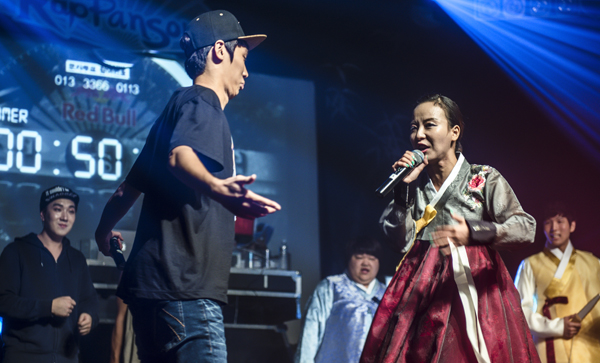 Music battles are all the rage these days. DJs square off on their turntables, singers face singers on audition TV shows and rock groups often compete in battle-of-the-band events. And, of course, rap battles are a defining aspect of hip-hop.

But in all those competitions, the one constant is genre. Singers compete against singers, not DJs or rock groups.

Last Friday night, however, those rules all went out the window, as rappers went head-to-head against pansori (traditional storytelling music) singers in the Redbull RapPansori, a contest held at V-Hall in the Hongik University area of western Seoul. On the surface, it is one of the more jarring contrasts imaginable - the brash, modern swagger of hip-hop competing against the Korean traditional performance style.

However, like rap, pansori is a speech-based performance, telling stories with more than a little bluster and improvisation.

Kim Jin-pyo, a rapper who is married to a gukak (traditional Korean music) musician, presided over the one-of-a-kind battle.

About 400 people attended the event, as rappers and pansori performers showed their stuff in a series of showdowns that were judged by the audience using text-message voting.

During the first round, each participant had to freely rap and narrate for one minute using rap music and one more minute using pansori.

The first pansori singer was Lee Jung-won, who was clad in a traditional, full-length Korean robe and traditional hat. “Well, what is music?” he asked, skillfully performing a narrative for one minute to the rap music.

His counterpart, Hwang Sang-yeon, rapped fiercely, but he could not get into the rhythm when the music changed into pansori. 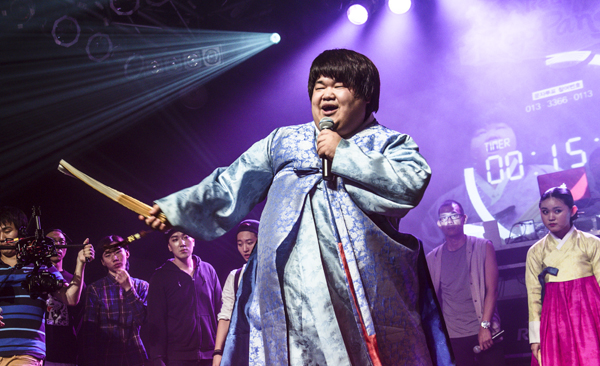 In the next round, however, rapper Han Jong-ho impressed with his solid rhymes, landing a series of hard-hitting insults against his competitor, Shin Dong-jae.

Unsurprisingly, the rappers in general were more aggressive than the pansori singers, some filling their raps with a barrage of curse words.

A few of the pansori singers were intimidated by aggressive language, but others stood up to the rappers.

Pansori singer Cho Da-jeong grooved to the rap beat as she narrated: “Pansori goes well with the rap beat. You’re not the only one who knows the music. You’re 20 and I’m 30. To me you’re just a cutie, cutie.”

Pansori singer Lee Seung-min was attacked hard for his rather ample size. “You gotta’ lose weight,” one rapper said. “You’re such a hog.”

But Lee just hit right back. “Audiences wouldn’t like me if I were slim,” he said, adding a volley of swear words of his own, in a booming pansori tone.

Four pansori signers and four rappers made it to the quarterfinals. But because of the way the competition was designed, not all the matchers were rapper versus pansori at this point. Some rappers faced other rappers, and some pansori singers faced pansori. Three pansori singers and one rapper advanced to the semifinals.

While the audience was mostly young people in their 20s and 30s, more accustomed to rap than Korean traditional music, the pansori singers did a good job of winning over the crowd.

The final competition came down to young pansori singer Lee Seung-min, 20, and rapper Han Jong-ho, 19 - and Lee pulled off the victory.

“One of my dreams is making a crossover album between gukak and hip hop,” said runner-up Han. “And this battle helped me think of how.”

Many in the audiences said the competition helped them rethink how they felt about traditional music.

“I used to think gukak is boring, but I had a lot of fun watching this battle,” said Lee Eun-hye, 27, who majored in classical music in college.

Organizers said it was not hard finding a solid lineup of underground rappers to perform in the contest, but getting enough young pansori singers was difficult. So few young Koreans are studying pansori and traditional music that they had to visit universities all over the country to get their competitors.

“Since the battle ended with rave reviews, we hope to organize second and the third competitions in the near future,” said one organizer.