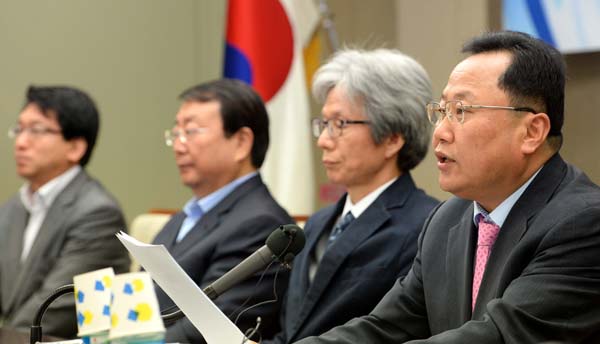 The authors of the Korean history textbook accused of promoting right-wing views at a press conference at the Press Center in Jung District, central Seoul, yesterday. [NEWSIS]

The authors of a controversial Korean history textbook said they would rework the text as ordered by the Education Ministry. The text was approved by the government last month, but critics have complained of a right-wing bias in its approach to history and demanded that it not be used in classes.

But the authors also defended their text, saying charges that the book glorifies the Japanese occupation of Korea are simply untrue.

“There are minor typos and other imperfections, but those problems can be fixed through revisions,” the authors, represented by professor Lee Myeong-hee of Kongju National University, said at a press conference yesterday morning. “[The book] is in its early stages, so we admit that it is incomplete and inadequate. We will review the problems raised recently and make necessary revisions.”

Liberal politicians as well as descendents of independence fighters have attacked the ministry, asking it to cancel altogether its approval of the text. The ministry conceded in part, saying last week that it would re-examine all eight history texts it approved on Aug. 30 and order changes as warranted.

The authors scoffed at claims that the whole book should be scrapped, noting that it had been approved by the ministry and that other prominent academics, including former education ministers, had concluded that the book was a good one.

They also rued the fact that the book has become a political hot potato. In a written statement, the authors said, “The recent controversy is something that is not understandable in a free democratic society. Debates over history textbooks must be debates by students and by the public, not an ideological war between historians and politicians.”

The authors, conceding that their text had a conservative slant, noted that the other seven books approved by the ministry recently approached history from a politically liberal point of view.