Paying someone else to take a test can be risky

Paying someone else to take a test can be risky 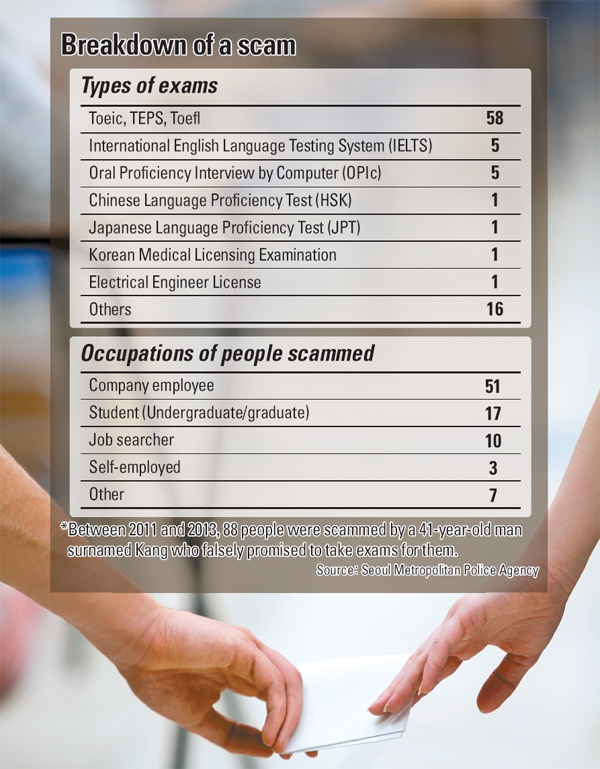 Pressure to get ahead no matter what is leading people to cheat on qualification and licensing tests - and in some cases, even pay someone else to take the test for them.

A 36-year-old man who works in a public sector company needed an electrical engineer license to be eligible for a promotion.

But he was daunted by the idea of studying for the licensing test on top of working full-time.

He stumbled upon an Internet advertisement with an irresistible promise: “We will take any sort of licensing examinations for you.”

The idea of simply paying 2.5 million won and not having to study was too good not to go along. He transmitted the money.

He never heard from the agency again.

Another man in his 20s searching for a job also resorted to underhanded means to get good scores on the Test of English for International Communication, or Toeic, which is often required when applying for a job to demonstrate a candidate’s English proficiency.

The man thought some of his previous job applications failed because his resume wasn’t stellar.

He found a similar proxy test taking agency that promised to take the Toeic in his place for 2 million won. He sent the money, although he had to take out a loan. The agency vanished and he ended up with the same old resume and a 2 million won loan.

Kang, who was otherwise unemployed, earned 230 million won between April 2011 and August through his racket. His victims included civil servants, employees of large enterprises, business executives and students. He didn’t take any exams. He just took the money and ran.

The tight market for jobs for young people has fueled the fierce competition that makes people resort to such scams.

Alarmingly, there is also evidence of cheating on state exams like the medical or bar exams.

One of Kang’s victims was a 31-year-old woman at a medical school who asked for someone to take the national medical licensing exam slated for next January in her name. She paid Kang 10 million won.

Another person asked Kang about someone taking the New York State Bar Exam for him.

The proxy test taking agencies often use e-mail addresses from Gmail or Yahoo based abroad in order to avoid detection by authorities here. Gmail and Yahoo addresses are also easy to start up anonymously and abandon.

The police said the agencies request from between 1 million to 10 million won.

Some run away with people’s money. Others provide proxies to take tests. And there are still others that provide test assistance for someone in an exam through some kind of technology. The latter two methods have received the most attention in the media.

Most of the people contacting the agencies are office workers and the most common request was for a proxy for English proficiency tests such as Toeic or TEPS (Test of English Proficiency).

This is the third time police cracked down on cheating on English proficiency tests this year.

Sometimes a proxy isn’t needed. Last month, police caught a 24-year-old man surnamed Lee using smartphones and high-tech equipment to transmit Toeic question answers to 25 people taking the tests who asked for help. They each paid Lee 1 million to 3 million own. Many were employees at companies trying to get promotions or better jobs.

In April, a law school student in Seoul named Park, 29, paid a 25-year-old English instructor surnamed Kim to help him take the Toeic by sending him answers as he took the test.

Kim had 50 such clients who paid 2 million to 4 million won each.