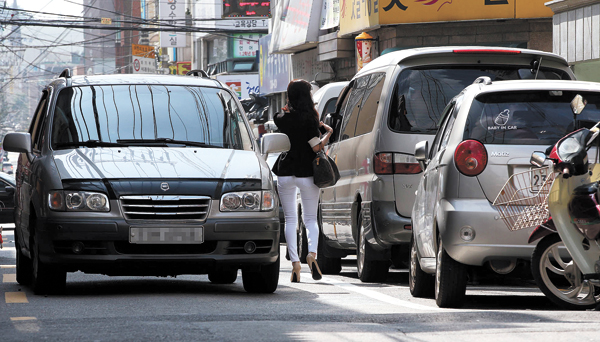 A woman in Gangseo District, southwestern Seoul, walking on one of the hazardous community roads. By Park Jong-keun

A mother of three, Seon Suk-young, 40, says she feels frightened whenever her children get dressed to play outside. The news last year that a female neighbor had died in a traffic accident haunts her. She worries that her children could end up facing the same fate.

“It’s difficult for me to see my children wander off because I know how dangerous this neighborhood is,” she said. Seon lives in Gangseo District, southwestern Seoul, an area notorious for its automotive accidents. Last December, a woman in her 70s was hit by a van as she walked out from an alley near Seon’s house. The driver reportedly didn’t see her.

When statistics from the Road Traffic Authority showed that 80 percent of the 1,766 traffic accidents in the district last year were related to the width of the roads, the residents knew that the woman could have been any one of them.

Most car accidents in Gangseo District occurred on roads narrower than nine meters (30 feet) that do not have clear delineations between the street and the pedestrian walkway. Such streets are known here as “community roads.” A typical community road in this district is five to six meters wide; the car lane is three meters across.

The blurred distinction between car space and space for people has created the common scene of pedestrians mingling with cars, often leading to fatal results. Twenty-one Gangseo District residents died last year on community roads there. Of all the accidents in the district, from fender benders to fatal crashes, 64 percent happened on such roads in 2010. That figure rose to 79 percent in 2011.

South Korea had the dubious distinction of ranking first among OECD countries in traffic fatalities in 2010, with a death toll of 114 per million of population.

Among the 5,392 people who died on Korea’s roads last year, more than 57 percent were killed on community roads.

“People are mixing with vehicles on narrow roads, and that perilous environment is what created the national stigma of having the highest traffic death toll,” said Ha Dong-ik, a professor at the Department of Civil and Environmental Engineering of Seoul National University.

Local governments, not the central government, are in charge of upgrading hazardous community roads, but budget problems are limiting what they can do.

Experts say that the scarcity of parking spaces is another reason that the problem seems intractable. People who cannot find a place to park their cars eventually just leave them in front of their houses, narrowing the roads further and making it harder for other automobiles and pedestrians to pass by.

“It’s impossible to widen roads for now,” said Hwang Kyung-hwan, director of the road division at Gangseo District Office. “Our only option is to enforce the rules on the ones we have and create safety zones around schools.”