‘Christmas in August’ on big screen

‘Christmas in August’ on big screen 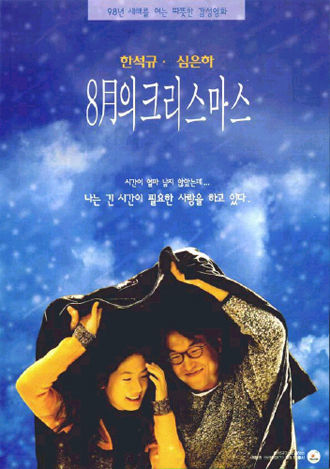 One of the well-known Korean-made romantic movies, “Christmas in August,” will be released on the big screen about 15 years after its original release in 1998.

The movie is the debut work of director Heo Jin-ho, and it tells a love story between a photographer named Jungwon, played by actor Han Suk-kyu of 1999 film “Shiri,” and a parking attendant named Darim, played by actress Shim Eun-hae of 1998 film “Art Museum by the Zoo.”

The movie distributor released two new posters, including one featuring a photo of Han and Shim riding a motorcycle together. The poster reads, “With who were you in love in 1998?” to remind people of the movie.

Another one features the back of Shim looking at a photo studio where Han was working and says, “The person who left with love is coming back.”

The movie will return to the theaters on Nov. 7.