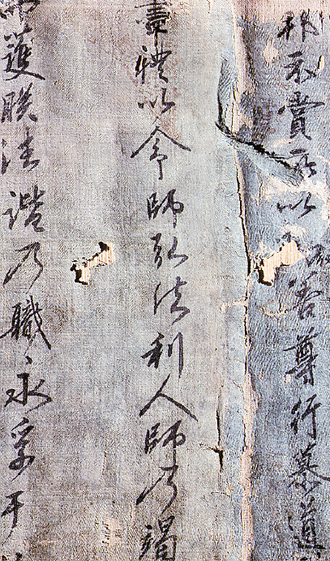 This is an edict bestowing the title of “great Zen monk” to Jin-gak Hyesim, who was the second great figure of the Jogye Order of Seon Buddhism, a major branch of Buddhism in Korea, in the third year of King Gojong, Goryeo Dynasty (circa 1216).

It is written in black and white on a scroll, made of seven pieces of red, yellow and white papers, and it measures 3.6 cm wide by 33 cm long (1.4 inches by 13 inches).

It is one of the few surviving royal letters bestowed to a monk in the Goryeo period, though, regrettably, parts of the lines are illegible due to its poor condition.

Buddhism is thought to have been introduced to Korea around the year 372. But only during the Unified Silla and Goryeo eras - when Buddhism was legally declared the state religion - that the religion really flourished.

Today, Buddhism is Korea’s No. 2 religion, slightly behind Protestantism, according to a recent survey. The last time such a survey was conducted, in 2004, Buddhists outnumbered Protestants by 5.1 percentage points.