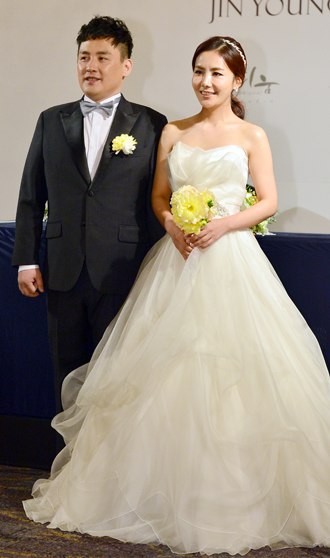 Celebrity couple Hyun Jin-young and Oh Seo-un finally walked down the aisle after being together 13 years.

The wedding ceremony, which took place on Saturday at the Lotte Hotel in Sogong-dong, central Seoul, was a long time coming, as the couple was legally married two years ago.

The 42-year-old groom Hyun said at a press conference before the ceremony that he was happy to see “13 years of fidelity come to fruition.” He also joked that the wedding had to take place when it did because “it’s best to have her become a bride when she’s pretty.”

Meanwhile the actress-entrepreneur retorted that she hoped her groom would be “more of a family man.” But she did say that she liked him as he was now better than she did 10 years ago.

The wedding was divided into two parts with comedians Yoon Hyung-bin and Kim Ki-wook taking turns at hosting. The singer-actor couple began dating in 2000 and became husband and wife on paper in June 2011. The wedding was postponed due to undisclosed personal reasons.

Hyun made his debut back in the 1990s where he was one of the most popular singers. His bride, although an actress, has made a bigger name for herself as the owner of an online clothing store.