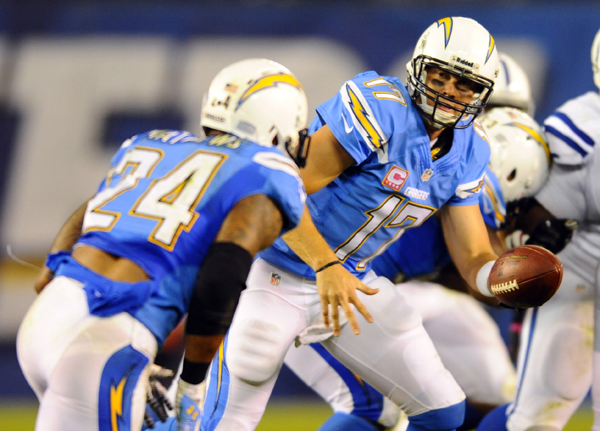 San Diego Chargers quarterback Philip Rivers (17) hands the ball off during the first half against the Indianapolis Colts at Qualcomm Stadium. [NEWS1]

SAN DIEGO - Philip Rivers and the San Diego Chargers slowly put to rest all that talk about Andrew Luck and the Indianapolis Colts’ offense.

It was hard for Luck to pull off another comeback, or even get into the end zone, while standing on the sideline. Rivers threw a 22-yard touchdown pass to rookie Keenan Allen, and Nick Novak kicked four field goals to give the Chargers a 19-9 victory against the Colts on Monday night.

“I wasn’t sure who the Colts were playing this week with all the ads I saw,” Rivers said, noting that all the pregame buzz surrounded the Colts (4-2), not the Bolts (3-3).

Rivers expertly guided a balanced offense on three scoring drives of at least 74 yards while rebounding from a three-interception performance in a dismal loss at Oakland.

That, and a lot of dropped passes by Colts receivers, kept Indianapolis from taking a two-game lead over Tennessee in the AFC South.

The Colts didn’t even score a touchdown. All their points came on three field goals by Adam Vinatieri. A week earlier, Luck helped rally the Colts to a 34-28 victory against Seattle.

Luck had no real chance against the Bolts because of two long drives in the second quarter that helped contribute to the Chargers dominating the time of possession, 39 minutes to 21 minutes.

Allen got behind safety Delano Howell and cornerback Vontae Davis on a post route for the touchdown, completing a 12-play, 74-yard march that took 6:14 and gave San Diego a 7-3 lead. It was Allen’s second touchdown catch of the season.

Novak’s first field goal capped a drive that went 79 yards in 17 plays in 7:58. The drive was kept alive when cornerback Greg Toler was whistled for illegal contact for pushing receiver Lavelle Hawkins out of bounds on third-and-6 from the Chargers 45.

Luck then completed four straight passes to move the Colts into Chargers territory before Coby Fleener dropped a pass at the 25. AP