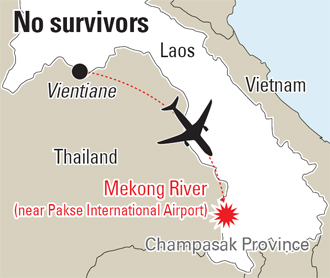 Three Koreans were among the 49 victims of a fatal airplane crash in Laos Wednesday, including the Korean businessman who developed a major golf course in Luang Prabang.

There were no survivors among the 44 passengers from 11 countries and five crew members after the Lao Airlines plane crashed into the Mekong River around six kilometers (3.7 miles) away from Pakse International Airport at around 4 p.m. local time, according to Laos officials.

Flight QV301 of the national carrier departed from the capital of Vientiane at 2:45 p.m. for an hour-long flight heading southward to Pakse, the third most populous city in the country. The French-made ATR 72 twin-propeller aircraft “ran into extreme bad weather conditions” as it prepared to land at the airport and crashed into the river, said the Laotian Ministry of Public Works and Transport in a statement.

The Korean Ministry of Foreign Affairs confirmed the identities of the three Korean men aboard the flight as Lee Jae-sang and Lee Hong-jik, both in their 40s, and golf course developer Lee Kang-pil, 58.

Lee Kang-pil was scouting for farmland in the southern region for development. Lee was the chairman of a Korean company that spearheaded the building of the 18-hole Luang Prabang Golf Club on the southern bank of the Mekong River. The 7,332-yard golf club in the Unesco World Heritage city of Luang Prabang opened in April 2011 and is considered a top golf course in the region.

A high school friend of Lee surnamed Choi, who works in retail electronics in Busan, described him as someone “who has accomplished a lot so far but still had a lot left to do.”

Choi told the JoongAng Ilbo that Lee had the Midas touch.

“Everything he did became successful,” he said. “He started out in the tuna fishery business, and three to four years ago he developed land in northern Laos, ranging from condos to golf courses.”

The other two Korean victims were 49-year-old Lee Jae-sang, who worked for a Korean construction firm based in Laos, working on a dam building project, and 48-year-old Lee Hong-jik, who was on holiday.

The Foreign Ministry said that an official from the South Korean Embassy was dispatched to the site of the accident.