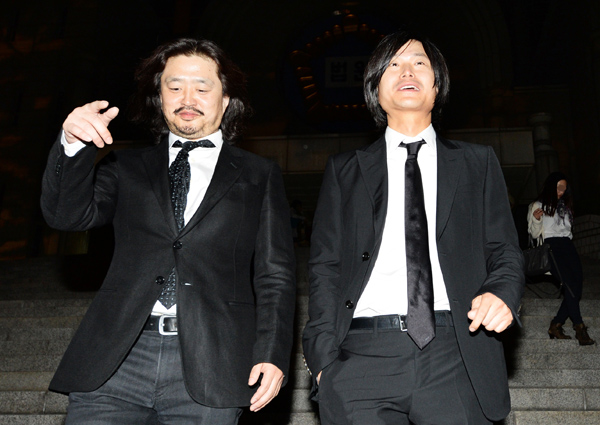 Kim Ou-joon, left, host of a podcast show “Naneun Ggomsuda” and Choo Chin-woo, a reporter for the news magazine SisaIN, come out of the Seoul Central District Court in southern Seoul yesterday after being acquitted by the court. [NEWSIS]

A Seoul court yesterday acquitted a well-known journalist and the host of a liberal podcast program of several charges, which included spreading false and defamatory information about Park Ji-man, the younger brother of President Park Geun-hye, and their father, the late President Park Chung Hee.

Kim Ou-joon, host of the show “Naneun Ggomsuda,” which roughly translate to “I’m a petty-minded creep,” and Choo Chin-woo, a reporter for the news magazine SisaIN, as well as a regular guest on the show, were cleared of all charges by a citizens’ jury.

The jury trial system is used when a defendant asks to be tried by ordinary citizens. However, the jury’s decision is non-binding, and a judge still makes the final ruling. In both cases, the Seoul Central District Court judge sided with the nine-member jury’s not-guilty verdict.

The charges stemmed from a December 2012 article Choo wrote ahead of the presidential election in which he alleged that Park Ji-man was involved in the brutal murder of one of the nephews of Park Chung Hee.

Kim Ou-joon later broadcasted the report on his show, which the prosecution argued affected the presidential campaign.

In the article, Choo referenced the 2011 case in which Park Yong-cheol, the 49-year-old nephew of Park Chung Hee, was found dead on a trail near Mount Bukhan, in central Seoul. Just a few kilometers away, the body of Park Yong-su, 51, another Park nephew, was found hanging from a tree.

According to reports, Park Yong-cheol was stabbed in the face, chest and stomach with a knife. He had also been hit over the head with a blunt weapon. Police recovered a knife and a hammer from the scene. Police also found a note and a car key in Park Yong-su’s pants pocket, and his death was ruled a suicide.

Investigators concluded that, based on the evidence, Park Yong-su had killed Yong-cheol, and then committed suicide. The case was closed in October 2011.

However, in his article, Choo claimed that Park Yong-su had not committed suicide. He argued that Park Ji-man had financial disputes with his family members over the Yookyoung Foundation, a charity started by Park Ji-man’s mother, which linked him to the case.

The prosecution also alleged that Choo had posthumously defamed the late President Park, citing a 2011 publishing party for his book, at which Choo said that Park Chung Hee had left assets for his family now worth more than 10 trillion won ($9 billion).

Choo and Kim were ultimately cleared of all charges.