Investors are all aboard on Hyundai Rotem IPO

Investors are all aboard on Hyundai Rotem IPO 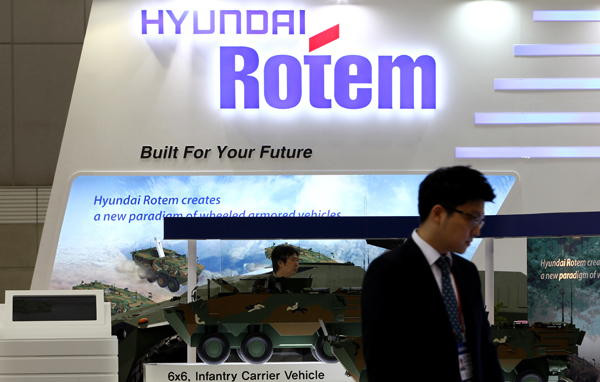 A visitor walks past a Hyundai Rotem booth at the Aerospace and Defense Exhibition held at Kintex, Gyeonggi, on Tuesday. [BLOOMBERG]

The train manufacturer saw its shares soar on its first trading on the Seoul main bourse yesterday, closing at 38,750 won ($36.55) after hitting the daily limit of 15 percent. That was nearly 69 percent higher than the 23,000 won that Hyundai Rotem priced its shares in a regulator filing earlier this month. The company hoped it would raise 622.4 billion won.

The market opened up by trading shares of the train maker 47 percent higher than the initial offered price of 33,700 won.

The share value of the company rose largely thanks to retail investors.

As a result, market capitalization of Hyundai Rotem at the end of the day amounted to 3.3 trillion won, which ranks 70th on the benchmark Kospi. It is roughly the same as Hanwha Chemical.

Investors have kept keen interest on Hyundai Rotem’s IPO not only as it was the largest since Samsung Life Insurance, but because many companies have refrained from being listed on the stock market due to the recession.

Founded in 1977, Hyundai Rotem dominates the train market in Korea. While 48 percent of its earnings come from its train business, 15 percent is from defense business and 37 percent from its plant construction business. Hyundai Motor is its largest stakeholder at 43.4 percent.