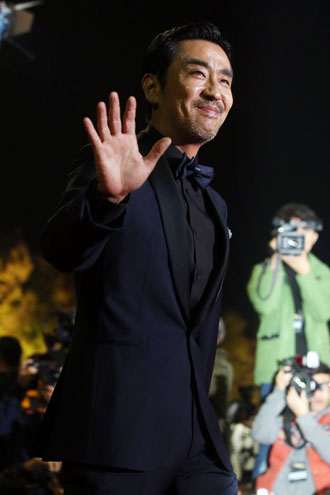 “Face Reader,” the story of a commoner who gets dragged into the world of courtly intrigue during the Joseon Dynasty (1392-1910), was the big winner at the 50th Daejong (Grand Bell) Film Awards, which took place Friday.

The award for best actor of the year was a tie, going to both to Ryu Seung-ryong for “Miracle in Cell No. 7” and Song Kang-ho from “Face Reader.”

Uhm Jung-hwa from “Montage” won best actress of the year. She had been nominated for the award four times, but this was her first time winning it.

The Daejong Awards also presented 10 million won in prize money to the best new director of the year in an attempt to promote the Korean film industry. The honor went to Jeong Byung-gil, who made “Confession of Murder” in 2012.

The Daejong Film Awards is the nation’s longest-running movie competition, although it has sometimes come under fire for its selections, with accusations of corruption and other scandals. However, this year, experts and critics said the awards focused on rewarding films that had both critical and commercial appeal.