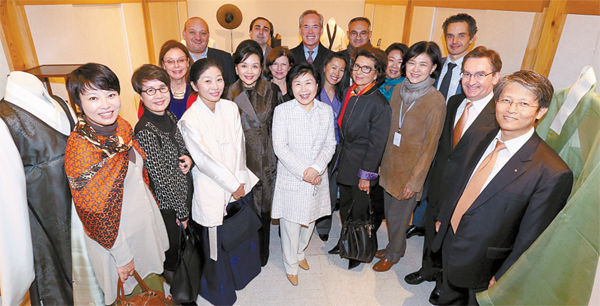 The seonbi - Korea’s traditional scholars of the Joseon Dynasty (1392-1910) - were truly fashionable.

That was the prevailing consensus among a group of foreign and Korean opinion leaders as they viewed a modernized male hanbok (traditional Korean clothing) on display on the first floor of a hanok-style building in Tonghui-dong, Jongno District, in central Seoul.

The group, some two dozen members of the Korea CQ Forum, gathered Tuesday for an exhibition hosted the Corea Image Communication Institute (CICI), which blended traditional and modern elements of Korean fashion.

The exhibit, “Po: the Seonbi Spirit in Clothing,” which runs through Nov. 20, pays homage to the po, the overcoat worn by the intellectuals of the Joseon Dynasty, and reinterprets the idea of the traditional hanbok. The event was organized by the Arumjigi Culture Keepers Foundation, a nonprofit organization that aims to protect and preserve Korean beauty.

“There is a splendor and practicality to be found in the dignified traditional attire of the Joseon era men,” said Jim Bemowski, vice chairman of Doosan Corporation, who was present at the event.

Yun-kyun S. Hong, Arumjigi’s chairwoman of the board, expressed similar sentiments. “At the center of traditional Korean culture is the spirit of the seonbi who were genuinely and splendidly stylish,” she said.

The seonbi were well versed in literature, history and philosophy, and were also dedicated to becoming more complete individuals by mastering art and poetry.

Downstairs, the group - made up of several corporate heads, attorneys and diplomats - viewed short-sleeved sportswear, an overcoat made of deerskin, and a variety of colorful hanbok. On the top floor of Arumjigi building, the visitors mingled around a hanok-style garden.

CICI, founded in 2003, has hosted the Korea CQ Forum twice a year since 2006 to offer Korean and foreign opinion leaders a variety of lectures and activities to help them understand Korean culture. So far, it has held 16 forums. The name Korea CQ refers to five aspects - culture, concentration, communication, creativity and cooperation. Those present at the exhibition included Joris Dierckx, head of BNP Paribas Korea; Yoon Yuh-soon, president of LG Art Center; and Omar Al-Nahar, the Jordanian ambassador to Korea.

The Arumjigi Culture Keepers Foundation was founded in 2001, and since 2004 has held exhibits annually showing the modernization of traditional Korean furniture, handicrafts and other cultural aspects.

The foundation started off in a small hanok in Anguk-dong, Jongno District, but early this year moved to a new building that blends traditional hanok and modern architecture. It was designed by architects Kim Bong-ryol, president of the Korea National University of Arts, and Kim Jong-kyu, head of architecture company Metropolitan Architecture Research Unit.