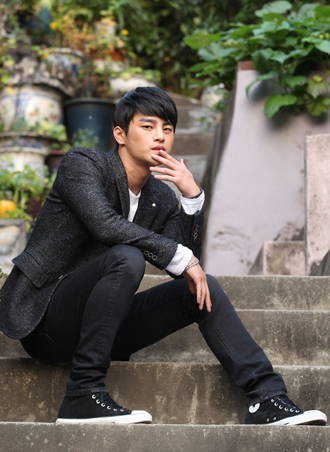 Seo In-guk, who got his start in the local entertainment industry by winning the first season of the survival audition program “Superstar K,” is also an actor.

After playing many roles on TV, including in the SBS drama “Master’s Sun,” he gave movies a try, making his debut late last month as the lead in the swimming story “No Breathing.”

Seo has earned plenty of good reviews as Won-il, a high school student who aspires to be a champion swimmer. It wasn’t an easy role, especially achieving an authentic swimmer’s build, Seo told Ilgan Sports, an affiliate of the Korea JoongAng Daily, in a recent interview.

Q. How did you get into shape for this role?

A. I had to pay extra attention as I was playing the role of a swimmer, and the other actors had such nice bodies. I had to at least try to emulate what they have. So I was careful about what I ate for six months and went to gym and swam. I usually ate vegetables and fruit, along with chicken breast and beef.

Didn’t you have hard time dieting when you first made your debut?

It is still hard being on a diet. It isn’t easy to control your appetite. It is especially hard for me, as I like carbohydrates so much. After I was done filming the TV drama “Master’s Sun,” I decided to give myself the gift of just eating whatever I wanted and not working out. The body I had in the movie is long gone now.

Were you always a good swimmer?

Because I’ve always liked playing in the water, I mistakenly thought I was a good swimmer. But after getting some lessons for this movie, I realized that I wasn’t. I had many bad habits. To get my form right, I had to relearn from the beginning. But I think now I can show off some good swimming form if I ever go to a resort. 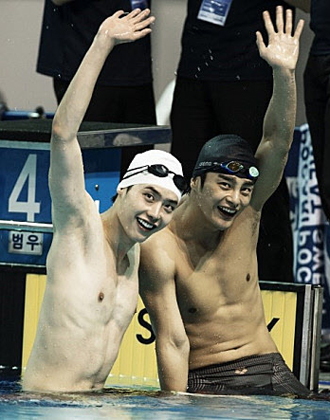 How did you become friendly with actor Lee Jong-suk, who was your rival in the movie?

I usually get friendly with people quite quickly. I heard that Lee has a hard time getting comfortable with people, so I thought that I should make first move. But when I actually met him, he approached me first.

Did you feel comfortable being around the crew in a swimsuit all the time?

Although I’m usually undressed at home as I live alone, it was very weird being in front of people only wearing a swimsuit. At first, I tried to cover myself whenever I got a chance, but soon I grew used to it.

Did you always think that you could be a successful actor?

Not at all. I wanted to become a singer, and I never thought about other things. But when a chance to act suddenly appeared, I wanted to take up the challenge.

What are your singing plans?

I’m having my first solo concert on Dec. 28 and 29. But I’m not trying to prefer either singing or acting. I want to succeed at both.