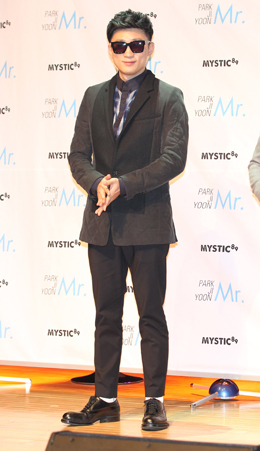 Sales of the song “I Got C,” composed by the hit producer Primary and sung by comedian Park Myung-soo, were suspended yesterday around noon after the songwriter was accused of plagiarism.

The song had been topping the charts in the two weeks since its release, after Park presented it on the entertainment show “Infinite Challenge” on MBC.

But since the release of “I Got C,” listeners have increasingly complained that it sounds too similar to “Liquid Lunch” by the Dutch singer Caro Emerald.

The jazz-swing style, loping tempo and bouncy beat of the two songs are immediately recognizable. But Primary denies copying the song, saying that the apparent similarities are just the nature of the genre, and if his song is plagiarized then all jazz-swing songs are plagiarized.

But David Schreurs, one of songwriters of “Liquid Lunch,” is contending that several songs produced by Primary also sound like his work - including Park Ji-yoon’s “Mister Lee,” which sounds like his “One Day,” and Primary’s “Happy Ending,” which sounds like Emerald’s “I Know That He’s Mine.”

As the debate intensifies, the broadcaster MBC and Primary’s agency, Amoeba Culture, decided to stop selling the songs online.

Primary also apologized for causing the controversy, denying that he copies, but promising to create better music in the future.