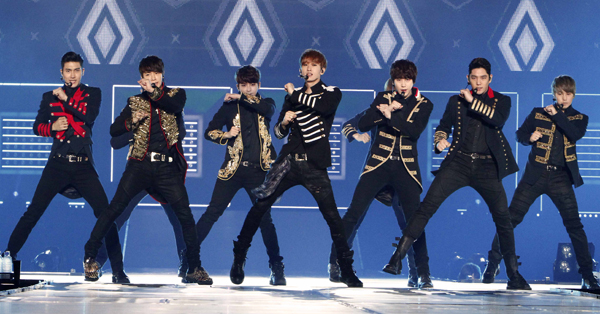 Idol group Super Junior completed two giant shows in Osaka over the weekend, playing to 90,000 fans on Friday and Saturday.

As part of Super Junior’s “Super Show 5” tour, the group started by performing one of its most popular songs, “Mr. Simple,” followed by “Sexy, Free and Single,” “Hero” and other tunes that performed well on the Japanese music charts.

“The group showed a great performance of 32 songs that mesmerized fans and again proved that it is the global Hallyu star,” said the group’s agency, SM Entertainment, yesterday.

Fans were especially pleased to hear the debut performance of “Blue World,” the group’s fifth EP in Japan, due to be released there on Dec. 11.

In addition, Super Junior members Donghae and Eunhyuk, who have garnered popularity for their EPs “Oppa, Oppa” and “I Wanna Dance,” announced that they will release their first full-length album together as a unit next year and will also hold another tour.

The group will now travel to Malaysia for a concert in Kuala Lumpur on Saturday.