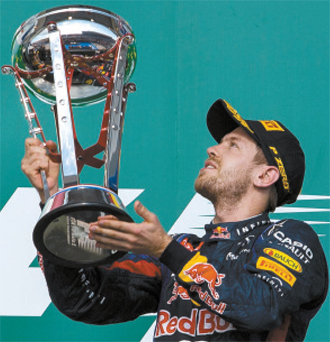 Sebastian Vettel promised he would never get used to winning, even as he celebrated a record eighth victory in a row at the U.S. Grand Prix on Sunday.

Asked whether he felt like pinching himself at what he had achieved, Red Bull’s quadruple world champion grinned: “Not just step back and pinch. I think step back and hit hard. That’s more like it.”

Amid the back-slapping and champagne being sprayed in the Red Bull hospitality, Vettel and team principal Christian Horner struggled to come to terms with a season that continues to rewrite the record books.

Red Bull, like their 26-year-old driver, have won every title for the past four years, but this year has set a new level of dominance.

Having clinched a fourth consecutive drivers title last month in India, becoming the youngest ever quadruple champion, Vettel had managed to find fresh motivation where others might have eased up.

He showed the same hunger and zeal at the Circuit of the Americas on Sunday as he did two weeks earlier when he had equaled Michael Schumacher’s 2004 record of seven wins in a row in a single season.

“I think the moment you are not hungry anymore and are asking yourself what are you doing, it’s time to move on and do something else,” he said. “I jump into the car and I just want to be fastest. It’s still there, same as a couple of years ago.

“Obviously it [winning races] was more the case lately than many years back, but still I think you should not allow yourself to get used to it.”

With just one race remaining in Brazil next weekend, Horner said the team will keep their foot on the gas all the way to the checkered flag in Sao Paulo, where Vettel can equal Schumacher’s record of 13 wins in a season after collecting his 12th in Texas.

“I think when we reflect at the end of the season on what we have actually achieved this year, it’s very remarkable,” Horner told reporters.

“He [Vettel] was quite emotional at the end of the race because he has beaten the record of one of his idols when it seemed likely that kind of record would not be beaten.”