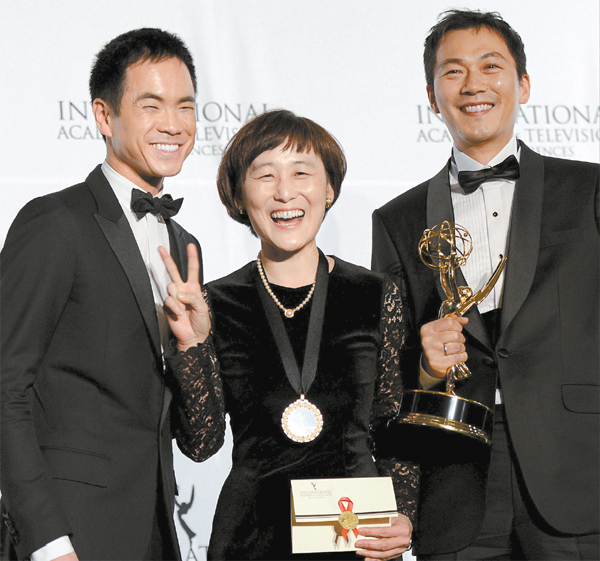 Ahead of its theatrical opening tomorrow, the documentary “Hello?! Orchestra” tied for first prize in the Arts Programming section at the 41st International Emmy Awards on Monday in New York.

The other works competing in the section were “Soundtrack” from Belgium and “Multiple Views” from Mexico.

MBC producer Lee Bo-young said the network was excited by the prize and that all credit should go to the children who took part in the project as well as to O’Neill.

The film is about the power of music and focuses on the lives of 24 troubled children from multicultural families who are to put on a recital in three months, with O’Neill as their mentor.

A graduate of the Juilliard School of Music, O’Neill reportedly was attracted to the project because his mother is a Korean adoptee who experienced life growing up in-between two cultures.

The International Academy of Television Arts & Sciences awards the best works made for TV from some 400 members that belong to the organization from 70 countries.

Another MBC documentary, “My Mother, Lady Bondong,” also received an Emmy nomination, in the Documentary section, but it did not win.

Brazil and France had two apiece, while Korea, Australia and Germany each got one award. The 36 nominees represented 19 countries, including first-timers Angola and Uruguay.

Bean, best known for his roles in “The Lord of the Rings” and “Game of Thrones,” won the best actor award for his role in an episode of the crime anthology series “Accused.” Bean portrayed a shy English literature teacher with a secret alter-ego of a flamboyant transvestite who gets involved in an affair with a married man that leads to a brutal crime of passion. The veteran actor said he was especially “delighted” because “I’ve never actually won anything before.”

Earlier on the red carpet, Bean said he took on the against-type role because it’s something he’s “always kind of aspired to - playing diverse and different characters.”

“I guess that’s what excites us as actors and this was a wonderful opportunity for me to display another side of my character,” he said.

Britain’s “Moone Boy,” about a young Irish boy who survives his chaotic family life with the help of an imaginary grown-up pal, won in the comedy category.

Montenegro, who received an Oscar nomination for the 1998 film “Central Station,” was chosen best actress for her role in “Doce de Mae” (“Sweet Mother”), in which she plays an 85-year-old woman who wishes to live independently and take on new experiences, like dancing. She called it “a special moment in my professional life” and shared the honor with her director and cast mates - “the wonderful, marvelous actors from Brazil.”

The telenovela award went to Brazil’s “Lado a Lado” (“Side By Side”), which tells the story of two women - one a descendant of former slaves and the other from an aristocratic family - who become friends in Rio de Janeiro at the beginning of the 20th century.

The Emmy for best drama series went to the French zombie thriller “Les Revenants” (“The Returned”), about a small alpine village that is rocked when several people presumed dead suddenly reappear at their homes as ghostly characters in human form.

The film, which was nominated for a best documentary feature Oscar earlier this year, was shot by Burnat, a Palestinian farmer, and depicts life and non-violent resistance in a West Bank village. It is structured in chapters around the destruction of each of his cameras.