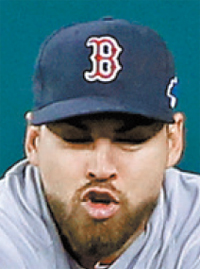 Free agent outfielder Jacoby Ellsbury, fresh off winning the World Series with the Boston Red Sox, reached an agreement with the rival New York Yankees on a seven-year contract worth about $153 million, a person familiar with the negotiations said Tuesday night.

Ellsbury is the second major free-agent addition in the Yankees’ offseason rebuilding. He was to take a physical in New York on Wednesday, the person said, speaking on condition of anonymity because no statements were authorized.

The Yankees also had been negotiating with Choo Shin-Soo, who, like Ellsbury, is represented by agent Scott Boras.

There is a long history of stars moving from Beantown to the Big Apple during their careers. Babe Ruth was the most famous, and Roger Clemens, Wade Boggs and Johnny Damon followed.

Ellsbury, who turned 30 in September, led the majors with 52 stolen bases despite being hobbled late in the season by a broken right foot. The lefty-hitting leadoff man batted .298 with nine homers and 53 RBI.

Ellsbury’s deal includes a $21 million option for the 2021 season, with a $5 million buyout. If the option is exercised, the deal would be worth $169 million over eight years.

The move would raise the Yankees’ luxury tax payroll to $138 million for 10 players. The Yankees hope to get under the $189 million tax threshold next season, which includes about $177 million for salaries for the 40-man roster.

New York also has been speaking with the agents for Robinson Cano, their All-Star second baseman. The Yankees, who rebuffed his request for a 10-year deal worth more than $300 million, believe he has been in talks with the Seattle Mariners.

Ellsbury won a pair of World Series titles with the Red Sox and was an All-Star in 2011.

McCann, a seven-time All-Star, is to be introduced at a news conference Thursday at Yankee Stadium.

He receives $17 million in each of the next five seasons, and the Yankees have a $15 million option for 2019 with no buyout.