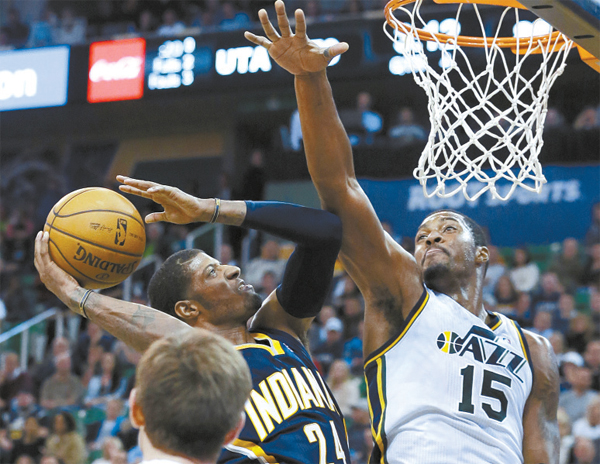 Paul George scored 19 points and the Indiana Pacers returned to their defensive ways in beating the Utah Jazz, 95-86, on Wednesday. Lance Stephenson scored 15 points, Luis Scola had 14 and Roy Hibbert added 13 points to win in Utah for the first time since an 84-60 victory on Nov. 29, 2005.

The Pacers were coming off their first back-to-back games of the season in which they allowed their opponent to reach 100 points - against the LA Clippers and Portland. But Indiana outscored the Jazz, 27-19, in the fourth quarter and parlayed 14 Utah turnovers into 20 points.

Gordon Hayward’s 3-pointer cut the Indiana lead to 79-76 before the Pacers scored nine straight points, capped by West’s 20-foot jumper that just beat the shot clock, and never looked back.

Hayward and George, who have worked out together in the summers and were drafted ninth and 10th in the 2010 draft, both struggled with their shooting against each other’s tenacious defense.

When George finally made a 3-pointer - his first in eight attempts - with 53 seconds left, he paused and pointed skyward in relief at seeing one drop. George finished 7 of 20 from the field after an acrobatic layup with 21 seconds remaining.

Hayward made only 3 of 14 shot attempts and finished with 12 points.

Behind 10 points each from Kanter and Derrick Favors, the Jazz built an 11-point lead in the first half that evaporated to 48-47 by halftime. Led by Stephenson, the Pacers used an 18-4 run bridging the second and third quarters to move in front.

The Pacers are the top defensive team in the league - holding opponents to 39.5 percent shooting and 87.6 points per game - but they allowed the Clippers to score 100 points in a win and the Blazers 106 points in a loss on the current five-game road trip.

Power forwards Marvin Williams (foot) and Jeremy Evans (flu) sat out the game for the Jazz, but Utah attacked the Pacers for three quarters and led 69-68 after Kanter’s layup to open the fourth quarter.

But the deeper into the fourth quarter they went, the more difficult it was for the Jazz to score. The Pacers disrupted the Jazz’s offensive sets and when Utah found open looks they missed down the stretch.

The Pacers’ tough trip concludes with a back-to-back set against San Antonio on Saturday and Oklahoma City a day later.

Stephenson, upset with an offensive foul call in the fourth quarter, threw the ball over his shoulder and got a technical foul. Kanter looked as if he threw Hibbert to the floor in the final two minutes but Hibbert gave a sly smile, indicating he may have helped sell the call. Though he traveled with the team, Danny Granger has only played five games this season for the Pacers due to a strained calf and is still inactive.