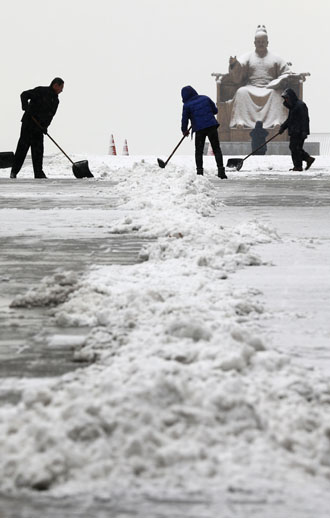 Workers shovel snow from Gwanghwamun Plaza in central Seoul yesterday as heavy snowfall hit nationwide. Seoul was blanketed in 4.4 centimeters (1.7 inches) of snow yesterday as of 5 p.m., prompting the Korea Meteorological Administration to issue a heavy snow advisory at 3 p.m., which was lifted two hours later. The weather agency forecast that Seoul would have its coldest morning of winter so far today, with temperatures dropping to minus 7 degrees Celsius (19.4 degrees Fahrenheit). Seoul’s mercury will go up to minus 2 degrees Celsius at noon but will not climb higher today, while Jeju Island is expected to have warmish weather; its mercury will reach 8 degrees Celsius. The country’s central region will record temperatures ranging between minus 13 degrees and 2 degrees Celsius this morning, and the Gangwon and Chungcheong regions are forecast to have up to seven centimeters of snow today. By Kim Seong-ryong