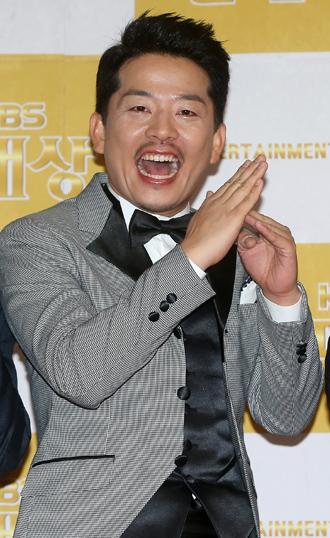 The veteran comedian with a 17-year career beat out other top-notch comedians, including Yoo Jae-seok, Shin Dong-yup and Lee Young-ja, thanks to his contributions to many KBS shows like “Gag Concert,” “1 Night 2 Days” and “The Human Condition.”

“I came to KBS back when I was a middle school student,” said Kim, as he received the award. “I just wanted to see my role model Shim Hyung-rae, but the guard stopped me from entering the broadcasting station.

“So I made up my mind to become a comedian in order to pay him back. I already realized my dream, but this award made me go further than that.”

Unlike other experienced comedians, who usually transition to host variety shows, Kim is still active in variety shows.

Winning the award is more meaningful for Kim because he was involved in a gambling scandal in 2009 and had to stop all his TV appearance for about a year.