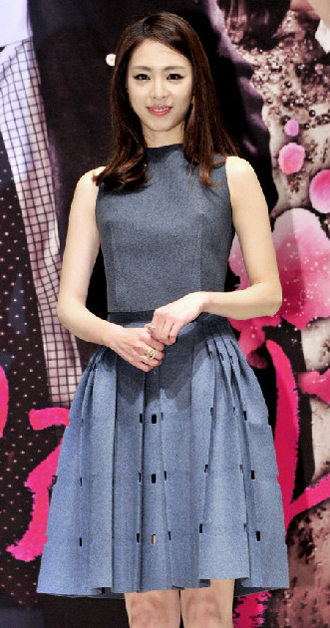 One thing to look for when watching the new MBC drama “Miss Korea” is how much Lee Yeon-hee has developed her acting skills.

The star earned some compliments for her part in the MBC drama “Gu Family Book,” which ended in June, but now she is playing a more challenging and playful character, rather than the calm roles she mostly took on before.

As the name “Miss Korea” implies, Lee plays a contestant in a nationwide beauty pageant. Like real-life contestants, Lee poses in a swimsuit and shows herself off during the competition. She said it wasn’t easy to take on the role as she has never played anything so audacious before, but she grew more confident as filming went on.

Q. Why did you decide to join this drama?

A. The subject matter for the script was very fresh. I worried a lot after I got the script because I was debating if I could do it well. But the script was too good to turn down. And the character was too attractive for me to not take up the challenge.

Isn’t it your first time playing a strong and wild character?

It is something I had not tried before, so it was sometimes hard for me. I’m the one who leads the other younger co-workers in the drama and it is fun to play that kind of character. I think it might be something new for audiences to watch.

What was the most difficult thing you faced during filming?

I had to go through a series of challenges. I felt burdened about appearing in a swimsuit and I worried a lot about filming the scene where I took a bath. But, when I was actually doing the scene, it wasn’t so hard or burdensome. Many people helped me on the set so that things went smoothly. I think I actually had fun. Maybe I’m getting influenced from the character I play; I think I’m getting more bold and audacious.

Did you ever dream about competing in a beauty pageant when you were young?

I dreamed about becoming an actress when I was young. I was training to make that dream come true, so I never thought about beauty pageants.

I started my acting training in 1997. I was trying to show what I could do. Also, I was listening to a lot of music, as that was when H.O.T was active.

What is the best way for audiences to appreciate your character?

I have not had as much acting experience as others, and I’m not yet so skilled. I’m trying to act well without overdoing it. The character I play is strong on the outside but soft inside. I think the key for me is to act so that such a character can be shown.