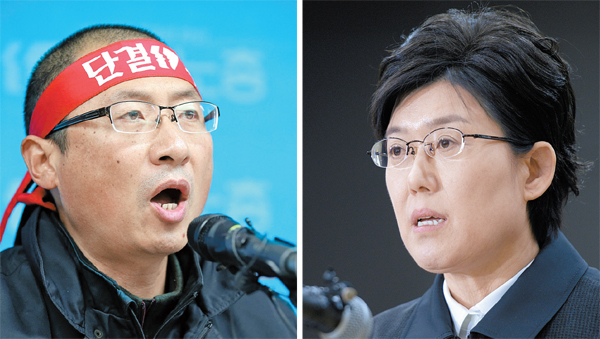 Kim Myeong-hwan, left, a Korail labor union leader, tells the press that the company must cancel its plan for a new subsidiary, while Korail president Choi Yeon-hye, right, gives an ultimatum to workers to go back to their jobs if they don’t want to be replaced by temporary workers at duelling press conferences yesterday in central Seoul. [NEWS1]

Tensions ran high in the tug-of-war between Korea Railroad Corporation (Korail) and its unionized workers as management told them to return to work or be fired following failed negotiations to end the longest rail strike in the country’s history.

“Everyone, the employees participating in the illegal strike, I give you the final ultimatum,” Choi read from statement at a press conference. “Please return to work by midnight.

“Those who do not return by the deadline will be regarded as having no will to come back permanently, and we will take measures against them,” she continued.

“We yesterday posted a recruitment notice to hire 660 substitute workers and will continue to employ additional workers for normalization of operations.”

The union is protesting Korail’s decision to set up a separate unit to run a new bullet train service, calling the move a stealthy way of privatizing Korail. The government and the president of Korail deny any move toward privatization and have declared the walkout illegal because it had nothing to do with working conditions.

Following two rounds of talks between different sets of negotiators on Thursday, the two sides had closed-door talks to end the 20-day strike, which started at 6 a.m. yesterday. They were attended by Korail CEO Choi, members of management and labor leaders.

At around 8 a.m., union leaders walked out and told reporters that the negotiations had failed.

Soon after, Korail’s CEO held her press conference, which was followed by the union’s.

“If the management scraps its plan for issuing a license to the new subsidiary and comes forward for discussions on ways forward for the development of the national railroad, we will stop the strike and join further discussions,” Kim Myeong-hwan, leader of the union, said at the briefing.

“We proposed a multilateral arbitration organization that included the workers, management, the public and the government, but management declined it.”

So far, Korail has not issued the license for the new subsidiary due to the amount of paperwork required. A local court in Daejeon approved yesterday the issuance of the license by the government.

As for the union’s requests, Korail’s CEO said, “They are repeating the same demands” and “the issue of the license is not a matter we can decide.”

The Ministry of Land, Infrastructure and Transport, which is in charge of the licensing process, continued to process the paperwork for the new subsidiary.

Meanwhile, another union leader, Choi Eun-cheol, went to the headquarters of the Democratic Party in Yeouido, western Seoul, to seek help from the liberal opposition party.

On Christmas Eve, a union leader and three other union members took refuge in Jogye Temple, central Seoul, to evade the arrest of the leader. They also asked the Buddhist order to mediate.

Accompanied by a Korail worker who has been fired for striking, Choi entered the headquarters of the DP yesterday and met with several of its leaders and lawmakers.

At a press conference later, Choi said he told the politicians, “We want you and the political system to help us resolve the matter of the Korail strike through conversation and negotiation.

“If the National Assembly doesn’t take responsibility for this, we will face a disaster,” Choi said. “We can’t kick them out on the street once they’ve entered our building,” Kim Kwan-young, a spokesman of the DP, said at a briefing. “We will patiently listen to what they are saying.”

The National Assembly’s Environment and Labor Committee held a meeting for several hours with Korail management and its union.

A court has issued arrest warrants for 28 union leaders, most of whom are on the run. Thirteen union leaders based in Seoul are wanted for arrest, including Choi and Kim Myeong-hwan, and are hiding in different locations.