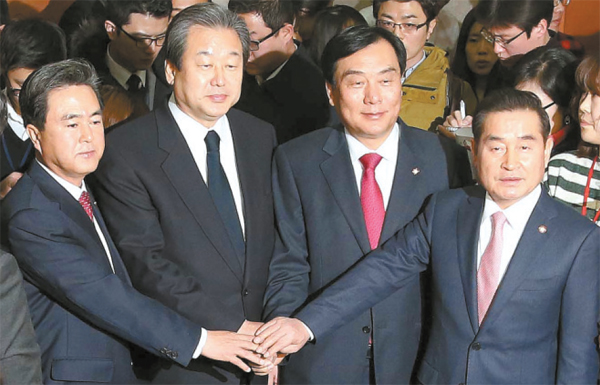 The Saenuri’s Kim Tae-heum and Kim Moo-sung and the Democrats’ Park Ki-choon and Lee Yoon-seok, of the Land, Infrastructure and Transport Committee, brief reporters yesterday after announcing the end of Korail’s strike. By Kim Hyung-soo

The labor union of Korea Railway Corporation (Korail) yesterday decided to end its prolonged strike after union leaders and lawmakers of the ruling and opposition parties agreed to form a subcommittee dedicated to dealing with pressing issues in the railway industry.

The unionized workers are scheduled to return to work at 11 a.m. today, but the union also stressed that they will continue to press their demands in the workplace.

The settlement put an end to the 22-day strike, the longest railway walkout in history, which was spurred by Korail’s controversial decision to introduce a separate operator to run a new bullet train service.

The union argued that the move was a step toward privatizing the public company, though Korail and the government denied those accusations.

The Land, Infrastructure and Transportation Committee of the National Assembly yesterday launched the special subcommittee and selected committee members. The group is scheduled to have its first meeting today, in a swift sequence of events, and Korail President Choi Yeon-hye is set to participate in the session.

Established under the parliamentary transport committee, the subcommittee is vaguely referred to as the Railway Development Subcommittee, although many expect it will be a primary communication channel to discuss divisive proposals among concerned parties.

On top of mid- to long-term development plans for debt-ridden Korail, possible items up for discussion include measures to prevent any future attempts at privatizing the company, which union workers state would lead to fare hikes and layoffs.

Under the agreement, the subcommittee will consist of an equal number of lawmakers from the two major parties, with Kang Seok-ho of the Saenuri Party to lead the group.

If necessary, a multilateral policy advisory panel can participate in the discussion and assist in the decision-making process. Korail officials, its union, the government and civilian experts are all eligible to participate in the panel, according to the terms.

Local media released a written statement in which Kim Myung-hwan, the leader of Korail’s union, agreed to end the walkout in exchange for the formation of the subcommittee. Four transportation committee members of both the ruling and opposition parties also signed the agreement.

Participating lawmakers Park Ki-choon, of the opposition Democratic Party, and Kim Moo-sung, of the ruling Saenuri Party, confirmed the breakthrough.

“After two members of the labor union entered the office of the Democratic Party and asked for an intermediary role from the party, [Democratic Party] head Kim Han-gill asked lawmakers to work on the mediation,” Park said.

Two union members - including spokesperson Choi Eun-cheol - are currently camped out in the headquarters of the Democratic Party in Yeouido, western Seoul, and police are looking to arrest about 20 union leaders.

“I got a call from Park late at night and wrote an agreement after receiving permission from our party,” said Kim, of the Saenuri Party.

“[The participants in the meeting] thought a verbal agreement was not enough, so we made a written document and then met [Korail union leader] Kim Myung-hwan to ask for his signature,” he said.

When asked whether he consulted with the presidential office, he replied, “[We] did everything needed.”

Kim, the union leader, said they will actively cooperate in the newly formed committee to “protect the public railway service [and] to serve public interests.” 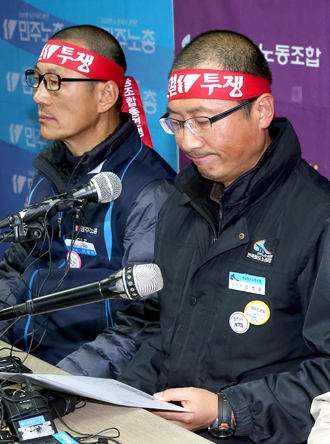 In the headquarters of the Korean Confederation of Trade Unions in Jung District, central Seoul, Kim Myung-hwan, right, the leader of Korail’s labor union, announces yesterday that the union will return to work at 11 a.m. today. By Kang Jung-hyun

“Through the participation and discussion in the subcommittee, we will work on preventing any attempt at privatization,” Kim said during the press briefing held at the headquarters of the Korean Confederation of Trade Unions. “The fight has not ended. And we will continue to wage the fight in the workplace.”

Korail welcomed the union’s decision to return to work. The president of Korail was scheduled to give a press briefing to explain its position about the end of the strike an hour after the briefing by the union leader.

But Choi canceled the scheduled event, saying that the union leader’s words weren’t clear enough to determine the strike’s end. It added that Korail was not involved in the negotiation process.

But despite the agreement, emotions ran high as the police vowed to continue their efforts to hunt down wanted union leaders. Law enforcement agencies and the government declared the strike illegal, saying the union’s demands were not linked to working conditions and could not be subject to negotiation. The union countered that possible privatization would affect their working conditions.

Kim, of the labor union, is now staying at the headquarters of the Korean Confederation of Trade Unions, while a handful of other unionists have sought shelter at Jogye Temple in central Seoul.

“We will detain the accused union leader as soon as he steps out of the office,” said a prosecutor at the Supreme Prosecutors’ Office.

“The striking workers will be held accountable for what they have done, regardless of the decision to withdraw from the walkout,” added the prosecutor, who spoke on condition of anonymity.

The police echoed that stance. “The withdrawal is a matter between lawmakers and union members,” said Lee In-seon, of the Seoul Metropolitan Police Agency. “We will act on the arrest warrants issued by the court.”

Korail also announced that it will go ahead with its plan to punish 490 union leaders involved in the strike and seek a compensation suit for financial losses incurred by the strike.

Identified workers were warned of severe penalties, which include dismissal. However, the railway union said that those accused have no plan to turn themselves in.

The record long rail strike affected high-speed KTX services as well as other passenger and freight train operations. More than 8,000 workers walked out, and Korail cut passenger train services by about 24 percent the past week.