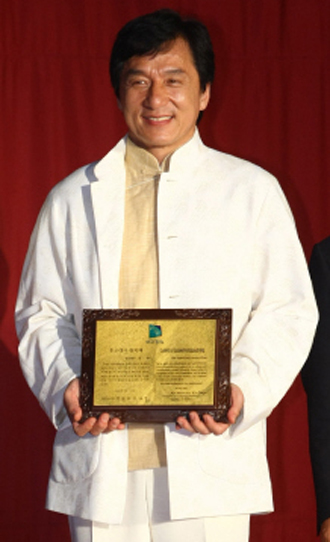 Chinese superstar Jackie Chan has confirmed he will appear on the KBS entertainment show “Happy Together 3” later this month.

It has been reported that the action star from Hong Kong could film his episode on Jan. 18, along with several Korean celebrities he is close to. As the theme of Chan’s episode will be “Jackie Chan and Friends,” Jessica of Girls’ Generation, Choi Si-won of Super Junior and Narsha of Brown Eyed Girls will join him on the program.

Narsha is known to have close connections with Chan’s family, while Jessica released a photograph taken with the martial arts star last year.

The celebrities are going to talk about the fun experiences they have had together. The show will air on Jan. 23.

The main reason Chan is coming to Korea is to promote the Jan. 29 release of “Police Story 2014,” the latest chapter in a long-running film series.