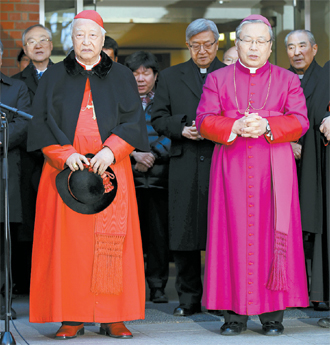 Seoul Archbishop Andrew Yeom Soo-jung said yesterday that, when he is made a cardinal next month, he will dedicate himself to the poor and disadvantaged, echoing Pope Francis’s emphasis on serving marginalized people.

“Today’s world suffers a moral crisis and unregulated materialism,” Yeom said during a ceremonial event yesterday at Myeongdong Cathedral in central Seoul to commemorate the pontiff’s choice. “This is precisely why the role of the church becomes so important. It should help the poor.”

Among the newly appointed cardinals, 16, including Yeom, will become cardinal electors. Cardinal electors, who must be under 80 years old, have a hand in electing the next pope, which is considered their most important task.

Cardinals serve as the pope’s closest advisers in the Vatican and around the world. Immediately below the pope in the church hierarchy, they also belong to members of key committees in Rome that make decisions for the Roman Catholic Church.

Acknowledging the critical tasks assigned to the College of Cardinals, Yeom expressed humility.

“I will follow the Pope’s decisions in deference to his words,” he said.

“The responsibilities of cardinals have really important implications. And I am personally fearful because I am lacking,” he said. “I think the pope appointed me in order to effectively conduct the mission of the church.”

He went on to acknowledge his two fellow Korean cardinals.

“I honor the efforts and achievements of the late Cardinal Kim, and Cardinal Cheong, and will contribute to fulfilling the mission of the Roman Catholic Church.”

“I hope Cardinal Yeom will fulfill his duty well and seek the blessing of Almighty God,” Cheong said.

“The decision also reflects Korea’s elevated status in the Catholic community,” he said.

About 300 Catholics attended the ceremony yesterday.

Born in 1943 in Anseong, Gyeonggi, Yeom has been described in the media as a moderate conservative. He has maintained that the religious community should steer clear of explicit political stances.

The debate over religious involvement in politics was reignited last year when Rev. Park Chang-sin made seemingly supportive comments about Pyongyang, including its shelling of Yeonpyeong Island in 2010.

Yeom will be formally elevated to cardinal at a consistory in Rome on Feb. 22.

Speaking in St. Peter’s Square after his Sunday blessing, Pope Francis read out a list of the 19 men, aged from 55 to 98, whom he had appointed.

Coming from 12 countries including the Philippines, Haiti and Burkina Faso, the 16 cardinal electors “represent the deep ecclesial relationship between the church of Rome and the other churches throughout the world,” Pope Francis said.

The appointments show a shift in the church’s changing demographics and, possibly, Pope Francis’s intention to elevate more bishops from outside the western World.

Still, there are some gaps between Western and non-Western countries.

According to Pew Research, the Philippines currently has a single cardinal representing about 75 million Catholics, while the United States, which has roughly the same number of Catholics, has 11 cardinal electors.