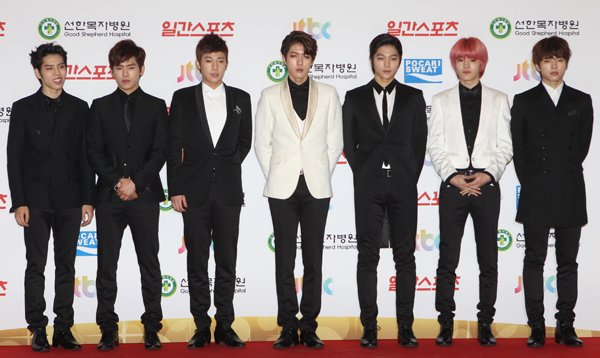 Tickets to Infinite’s two concerts in Seoul next month sold out almost immediately after going on sale Thursday, according to the group’s agency yesterday.

The shows at Seoul Olympic Park in Songpa, southeastern Seoul, on Feb. 28 and March 1 had about 20,000 tickets available altogether. But fans overwhelmed Interpark, the online shopping mall that was selling the tickets, the moment they were released at 8 p.m., causing the site to crash.

Infinite’s management agency Woollim Entertainment said that about 220,000 attempts were made to buy the 20,000 tickets.

The Seoul concerts are the first in Korea since the group started its world tour in August. For that tour, Infinite has gone to 21 cities in 15 countries, wrapping up in Dubai last month.

“The encore concerts in Seoul will satiate fans’ excitement as they will be put together with the know-how we accumulated through the world tour,” said an official at the agency.