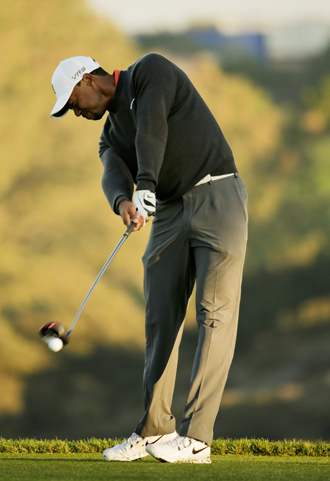 Tiger Woods hits a tee shot on the fifth hole during the pro-am at the Farmers Insurance Open golf tournament at Torrey Pines Golf Course on Wednesday in San Diego. [AP/NEWSIS]

SAN DIEGO - Tiger Woods was posing for pictures with a trophy Wednesday at Torrey Pines, and the tournament had not even started.

He has made winning look routine, particularly on this public course along Pacific Bluffs, where he has already won eight times as a pro, including a U.S. Open.

The trophy Woods received on the eve of his title defense at the Farmers Insurance Open was for being voted PGA Tour player of the year for the 11th time.

Woods doesn’t take winning for granted, even if others don’t appreciate how difficult it is.

That includes his daughter.

Woods told a story of 6-year-old Sam being curious about the Torrey pine on the trophy, which reminded his daughter of the bonsai tree she had seen in “Karate Kid.”

“She thought that’s what it was,” Woods said. “I said, ‘No, they’re a little bit bigger than that.’ I had to go online and show her the pictures and everything. I had all these trophies lined up and she said, ‘You need to get one of those.’?”

Woods tried to explain that it wasn’t that simple, that he had to play better golf than 155 other guys to earn it.

And so he did. Woods had an eight-shot lead on the back nine before the final round in a fog-delayed tournament was so backed up that it took forever to finish and Woods lost patience.

He won by four shots, and then surprised tournament officials when he wanted to take the trophy home on the plane instead of the tradition of having it shipped. He did not want to walk in the door as the winner at Torrey Pines without that trophy.

“They put it literally in the middle of the living room,” Woods said. “Everybody was dancing around the trophy.”

The music cranks back up on Thursday - another dance, his 19th year as a pro.

Woods conceded there are things he can’t do at 38 that he could when he was 24, such as produce the same speed when he rotates through the ball. But he’s also stronger and a lot smarter in dissecting a golf course.

“You’re still able to be successful, but you do it a different way,” Woods said. “You evolve as you age, and I think I’ve done that so far.”

The talk about Woods hasn’t changed, either.

Even though the Masters is just under three months away, any mention of Woods starts with the majors.

The playoff win at Torrey Pines in the 2008 U.S. Open was the last major he won. He has been stuck on 14 for the past five years, squandering good chances at the U.S. Open in 2012 and the British Open last year.

This would seem to shape up as an important year because three of the majors are on courses where he has won - Augusta National, Royal Liverpool and Valhalla. The U.S. Open is at Pinehurst No. 2, where Woods has finished third and second.

“I view it as every year is a big year,” Woods said. “Every year that I get a chance to compete and play in tournaments and major championships for as long as I decide to do it .?.?. every year counts. Looking back from the beginning of my career to now, I know that I don’t have 20 years in my prime. I don’t see being 58 and being in my prime. Most guys don’t dunk from the foul line at age 58, so it’s a little different. But the outlook is still the same.

“I still prepare the same,” he said. “I still work my tail off to be ready to compete at this level and beat everyone that I’m playing against.”

Woods and Phil Mickelson are the star attractions, as usual, at Torrey Pines. This was the first PGA Tour event that both watched when they were boys - Mickelson is from San Diego, Woods from about 90 minutes north in Orange County. AP