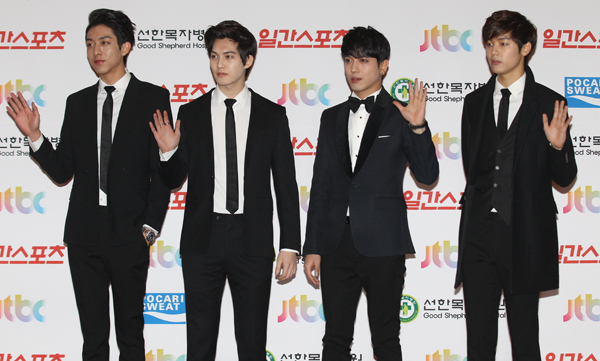 Boy band CN Blue is coming back with a new album later this month, according to the group’s agency, FNC Entertainment, on Tuesday.

“CN Blue is coming back to the Korean music scene with its fifth mini-album filled with songs that are written and composed by its members,” said the agency on its official Facebook account.

“We hope all of you have high expectations for it.”

The news is expected to excite many fans because the group’s members have been focusing on developing their individual careers recently.

In January 2013, CN Blue released “Re:Blue,” which was promoted with concerts in Mexico, Peru, Chile and other countries.

The group’s leader, Jung Yong-hwa, acted in the KBS drama “Marry Him, If You Dare” last year, while Kang Min-hyuk appeared in the SBS drama “The Inheritors.” Lee Jung-shin was on the KBS drama “The Blade and Petal,” while Lee Jong-hyun worked on duet project “Romantic J” with the singer Juniel in December.