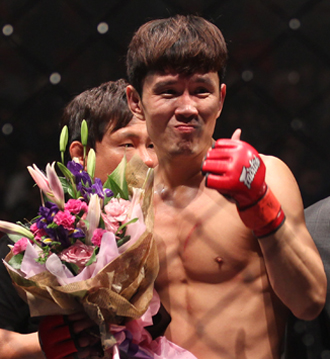 Yoon knocked Takaya down with a straight right in the first round, with 40 seconds still remaining. Yoon pounded away at the Japanese fighter until the referee called the fight.

“I have to call my wife,” Yoon said right after the fight, according to local media reports. “She could not watch the fight, so she is waiting for my call.”

Yoon’s comedian peers were on hand to support him, including Lee Kyung-kyu, Lee Yun-seok, and Jang Young-ran.

The 33-year-old comedian debuted in 2005 and garnered popularity by appearing on the KBS comedy program “Gag Concert.”