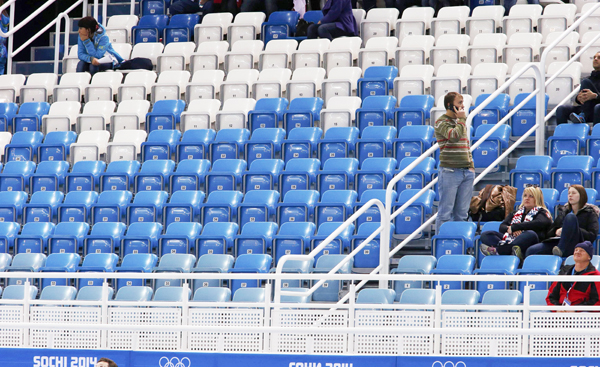 It’s an issue that comes up in the early days of almost every Olympics: What to do about those empty seats and lack of buzz?

It’s the case again in Sochi, with some senior Olympic officials voicing concern about less-than-capacity crowds and a dearth of spectator enthusiasm.

One International Olympic Committee member suggested Monday that school children and unarmed soldiers be let in to help fill venues.

Gerhard Heiberg, a Norwegian member who heads the IOC marketing commission, praised the overall organization but said the games weren’t as lively as hoped.

Heiberg said the issue had reached the highest levels of the International Olympic Committee.

“There are not enough people,” he said. “You have seen the stadiums are not filled.”

The men’s downhill - considered the marquee event of the Olympic Alpine ski schedule - failed to draw a full house Sunday, with a turnout of about 6,000 fans at the 7,500-capacity venue. Alpine skiing has little tradition in Russia and the games haven’t pulled in the cowbell-ringing crowds familiar in Western Europe.

Gian-Franco Kasper, a Swiss IOC member who heads the international ski federation, complained before the games that the capacity for spectators in the mountains had been reduced by several thousand.

“The great emotions lack so far in the outdoor venues, but that was to be expected,” he told German news agency DPA on Monday.

With the games still in the early stages, Heiberg said organizers have time to deal with the situation.

“They have to see to it they fill the stadiums,” he said. “I understand that all tickets have been sold and people who want to buy tickets they cannot buy tickets, so they should do something about this to get school children, or students or even military people without uniforms out watching.”

London organizers used volunteers and troops to help fill venues in the early going at the 2012 Summer Games.

Sochi organizers said Monday that they are using volunteers to fill the many empty seats at some of the less popular events. Spokeswoman Alexandra Kosterina said some volunteers enrolled in a motivation program are offered tickets to see competitions after hours.

Empty seats at the Olympics are common in the early days of the games. Sometimes, the empty seats are in areas held by corporate sponsors and media. There are signs that some would-be spectators from overseas have stayed home this time, scared off by security worries, the long travel and high airfares and hotel costs.

Some Olympic venues have a very Russian feel. Figure skating crowds, for example, seem to be almost exclusively Russian. The speed skating venue has been boisterous when the Russians or Dutch are racing.

Heiberg organized the 1994 Winter Olympics in Lillehammer, Norway. Those games were widely acclaimed for their large, colorful and passionate crowds in a country steeped in winter sports. “As an old man of winter sports,” he said, “I feel it’s important with the joy and the enthusiasm and the pleasure of being out in winter and watching sports.”