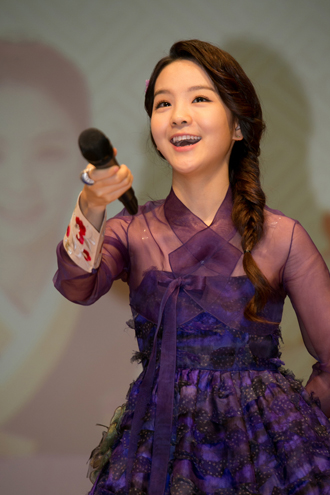 A television commercial from Korea’s second-largest telecom, KT, has been blanketing the nation’s TV channels this season. In the 30-second-long advertisement, the teenage traditional singer Song So-hee sings the praises of the company’s ultra-fast LTE technology.

The seemingly irrelevant combination of tradition and digital technology has fascinated people - followed, of course, by countless parodies on the Internet, making the 17-year-old a viral sensation.

The JoongAng Ilbo sat down with the prodigy of gugak (traditional Korean music) to learn more about her fascinating story.

Q. You were born in South Chungcheong, in a town famous for sijochang, a singing version of traditional three-verse poetry. Tell us how you got into gugak.

A. Well, when I was 5 years old, my parents noticed that I had a talent for singing, especially traditional songs. My father likes traditional Korean music, and I think that influenced me as well. While my classmates listened to popular dance music, I had minyo [Korean folk music] in my CD player.

We heard you have broken many records in the music business. Could you tell us some of them?

In 2008, I won the top award on “Korea Sings” [the nation’s longest-running television show]. I was the youngest person ever to win the grand prize. Afterward, I practiced hard and took part in many music contests for gugak. But, because I won too many prizes, contest committees told me I could not apply for junior awards anymore; so, from fifth grade, I had to compete against grown-up singers.

Some people criticize you by saying you try too hard to become famous without paying your dues. What do you think about that?

I know that many people are worried about my path, but I do not want to be a celebrity or idol of any kind. I am promoting gugak. Over the years, Koreans have been removed from their roots, and gugak has been neglected by the general public. I just hope people could get to know the music more easily and enjoy it any time without much burden. That’s why I take part in so many PR activities, like TV programs, commercials and becoming an honorary ambassador for the United Nations.

What is your favorite musical piece?

That would be “Bonjo Arirang” [a piece depicting the misery of common people in the 19th century]. Although I am too young to fully understand the regrets and sorrows of the lyrics, the multifaceted nature of the song never fails to inspire me. When I performed it in Moscow in 2010, a white-haired old man burst into tears. The song is truly meaningful to me.

Some people call you a prodigy. What do you think about that?

I still have a long way to go. It’s just that I was exposed to the music earlier than my colleagues. And I’m trying to hone my skills by learning instruments like the haegeum [traditional fiddle], janggu [drum] and gayageum [12-string zither]. I’ve also started to learn Western music, to broaden my horizons.

What is your favorite subject in school?

It’s history. My father has always emphasized the importance of learning Korean history because gugak musicians should sing the past, present and future of the nation.

What is your ultimate dream?

I wish people would be more familiar with Korean traditional music, like the girl next door. I know that I appear too much on TV these days, but it’s all part of the path toward my dream. Of course I want to be a great musician. I also want to promote gugak in fluent English.