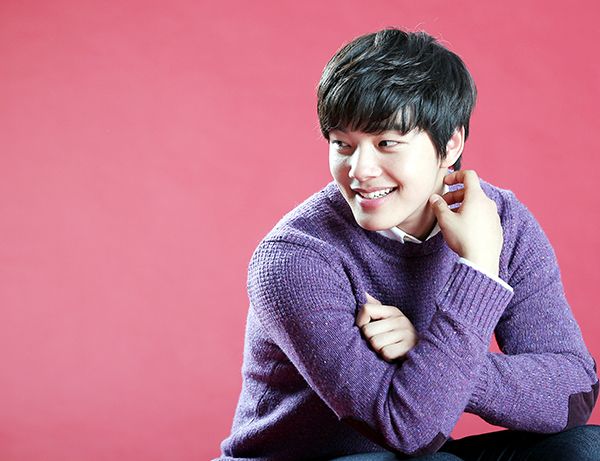 Yeo Jin-goo is just 16, but the teenage heartthrob is already celebrating the ninth anniversary of his career this year. From his debut in “Sad Movie” (2005) to his latest film “Hwayi: A Monster Boy” (2013), Yeo has widened his horizons in Korean TV dramas and films. Recently, the actor even tried out a sitcom, showing his candid and humorous side.

Ilgan Sports, an affiliate of the Korea JoongAng Daily, sat down with Yeo to discuss his young career.

Q. You won several rookie of the year awards for last year’s film “Hwayi.” How did that feel?

A. Well, it felt surreal to win those awards. I had never expected to win that many. I felt grateful to be nominated along with such great actors. I feel the responsibility to be a better actor.

“Hwayi” was an R-rated film. Have you had a chance to see it yourself?

Not yet. Although I did check out some of the scenes right after shooting them, I couldn’t see the entire movie because I was too young. Actually, I thought the producers would just let me in during the film premiere, but, to my disappointment, that never happened. (Laughs) After the premiere, director Jang Joon-hwan told me that I did a good job. When I come of age I will watch the movie myself and see if that compliment was true.

After playing such a serious character, you chose a role in the tvN sitcom “Potato Star: 2013QR3.” Why?

Because I want to build as many personas as possible in my acting career. Many people worried that I couldn’t get away from the tragic character Hwayi. But, as soon as the shooting ended, I was able to move on from the “monster boy.” Also, I’m still very young, I do not want to fix my character into one strong character. Sometimes, I have to be absurd and do some slapstick in “Potato Star,” but as long as it makes people laugh, it’s worth it.

You seem to be super popular among the older women, more so than young girls. Why do you think that is?

I’m not the pretty-boy type, I look more like the boy-next-door. And, compared to my age, I look more mature. I think that’s why they like me.

“Potato Star” airs Mondays to Thursdays, so you have to shoot it every day. Do you have time to hang out with your friends?

I can’t meet my friends as frequently as I could in the past. But I’ve been friends with them from when we were young kids and they understand. At the studio, I just spend time with my other colleagues. I’ve been working for about nine years, so it’s pretty usual for me to spend much time at broadcasting stations.

What kind of actor do you want to be in the future?

An irreplaceable one. I want people to think I am an original actor, incomparable to any other. Although Lee Byung-hun and Ha Jung-woo are my role models, my one and only idol is the late Australian actor Heath Ledger, who played the psychopathic character the Joker in “The Dark Knight.” Like Ledger, I want to straddle the line between good and evil. That’s why I’m interested in studying psychology at college. I want to express the complexity of humans through my acting in the future.