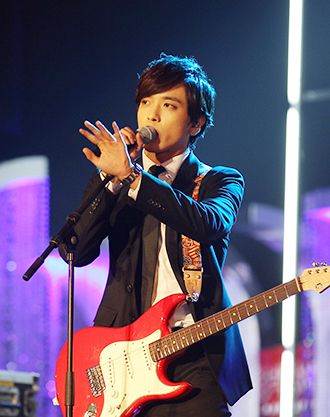 CN Blue’s frontman Jung Yong-hwa says he declined a role on the popular SBS drama “The Inheritors” last year because he was looking to get away from Park Shin-hye.

Jung and Park are known to be best friends. After acting together in the SBS drama “You’re Beautiful” in 2009 and in MBC’s “Heartstrings” in 2011, the two were repeatedly rumored to be in a relationship together.

“When the production team first offered me the role of Choi Young-do, I was quite fascinated by the character.

Also, I had a strong conviction that the drama will be very successful, since it’s writer Kim Eun-sook’s work,” said the 23-year-old singer.

Instead of “Inheritors,” Jung took a role on KBS’s “Marry Him If You Dare.”

CN Blue is scheduled to have concerts at Jamsil Indoor Stadium on April 19 and 20.