SHINee lays out plans for ’14

SHINee lays out plans for ’14 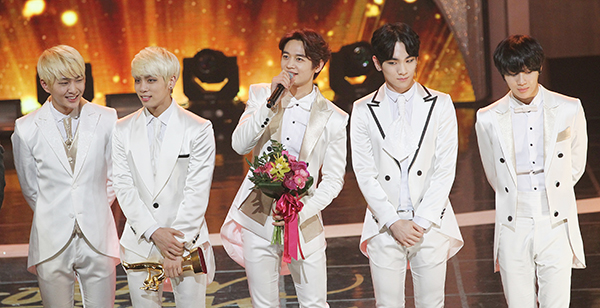 Members of the Korean boy band SHINee talked about their world tour and other plans for 2014 at the Olympic Gymnastic Arena yesterday before they went onstage for a solo concert, “SHINee World in Seoul.”

“Finally, our world tour is about to kick off and we are visiting South America for the first time. I consider it as an opportunity to show the world what we have got,” said Min-ho, one of the members.

The five-member group, which debuted in 2008, will start its tour in Mexico, followed by Chile, Argentina, Taiwan, Shanghai and Jakarta.

“We decided that the keyword for our concert will be ‘popcorn,’ ” said the group’s leader, Jong-hyun. “It means that just like the popcorns pop, we will jump onstage, enjoying and singing along with the audience.”