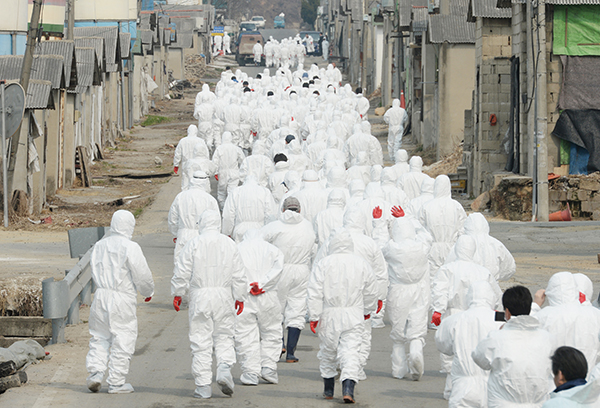 Disease control authorities walk to a poultry farm confirmed to have been infected with avian influenza yesterday in Gyeongju, North Gyeongsang, to cull 500,000 poultry birds as part of preventive measures. [NEWS1]

The confirmed outbreak report yesterday was particularly disappointing for quarantine officials, as North Gyeongsang had previously remained an AI-free zone.

The outbreak first surfaced in Gochang County, North Jeolla, in January. In a desperate attempt to contain its spread, authorities have slaughtered more than seven million poultry birds in less than two months.

The first outbreak of AI in North Gyeongsang has also raised questions about the effectiveness of preventive measures put in place against its spread. Authorities said the infected farm purchased 5,200 chickens from a poultry farm in Pyeongtaek, Gyeonggi, on Tuesday but did not report the purchase to the quarantine officials.

The fact that disease control authorities in Pyeongtaek permitted the transport after only conducting a visual check on the animals has also raised concerns about the loopholes in the quarantine measures.

To prevent a potential spread, the authorities plan to cull 60,000 additional chickens raised on another farm in Gyeongju today. Officials learned that the farm also had purchased 4,000 chickens from Pyeongtaek on March 1.